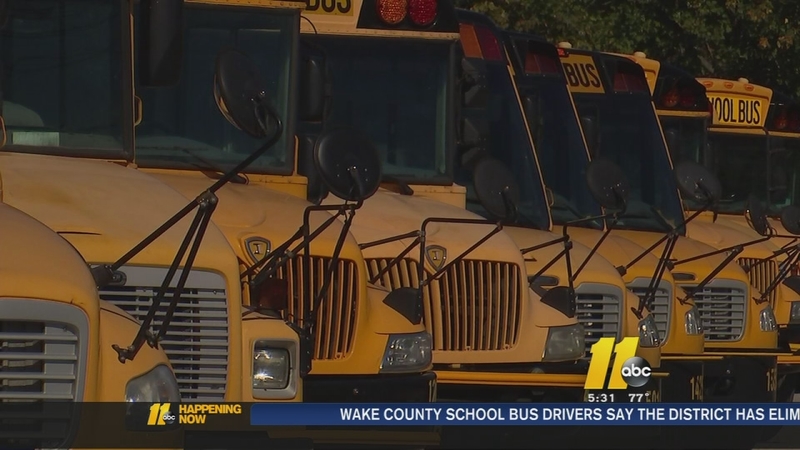 Some bus drivers say they are struggling financially

RALEIGH (WTVD) -- Some Wake County bus drivers say they are not getting enough hours behind the wheel.

Spencer Jenkins has been a school bus driver for more than 20 years and works full-time for Wake County Schools.

When his daily hours were cut recently, so was his paycheck.

"Last year, I was making 8 hours. This year, I can barely make 6," he said. "I'm actually getting less this year than I was last year."

The school board recently approved a 3 percent raise for support staff, including bus drivers, but with fewer hours, Jenkins says he will take home less money.

Over the past two years WCPSS has eliminated hundreds of bus routes and thousands of stops in an effort to reorganize its transportation department.

This year, 70 fewer buses are operating on Wake County roads.

While the move saved the district hundreds of thousands of dollars, Jenkins believes it's now costing drivers who are struggling to make ends meet.

"There are bus drivers sleeping in their cars. We just can't make it off the hours they're giving us," he said.

A district spokesperson says WCPSS is looking into his concerns but doesn't believe it's a widespread issue among bus drivers.

"We work to ensure that drivers are assigned work equitably across the department. Transportation staff who would like more hours are encouraged to request more hours from their manager," said WCPSS spokesperson Lisa Luten.

Jenkins says if he can't get more hours soon, he and others will consider more drastic measures.

"We're just not going to show up for work. I'm ready for whatever they do to me because we can't survive like this," he said.