Wake County school board votes to bring 4th-, 5th-grade students back to classrooms next Monday 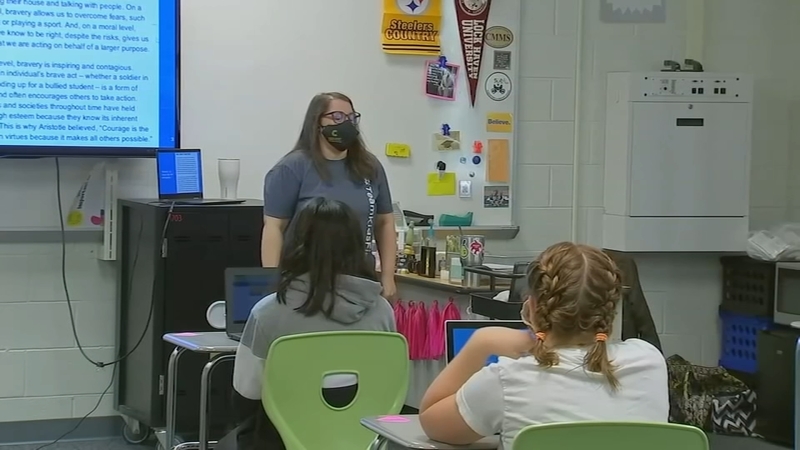 RALEIGH, N.C. (WTVD) -- The Wake County school board voted 8-1 for fifth and fourth grade students to return to classrooms next Monday.

Students in fourth and fifth grade will return to classrooms on March 15.

The vote followed a heated exchange between board members.

This is getting heated. Board members Hagerty and Martin going back and forth and chair Sutton has to cut them off. Hagerty accusing Martin of “using scare tactics” #abc11 #nced

Fourth and fifth graders returning now follow Pre-K through third grade students along with those in special education programs.

motion to bring 4th and 5th grade students back full time passes 8-1. Only @JMartin4Schools voted against the motion. Means those students will come back in Plan A starting next Monday #abc11 #nced

Carrie Flowers' fourth-grader Caitlin has been struggling academically. Her mother says being back in the classroom at Oakview Elementary will help and is exactly where she needs to be.

"It's unprecedented times. I know people were doing the best they can but the board of education should've had these kids in a long time ago," said Flowers.

"As the vaccines roll out and take on more, obviously if you end restrictions too early, it could be bad," said Stryker. "That's why we made the personal decision to stay through the end of the year."

Stryker was at the March 2020 school board meeting where he warned of the virus.

"I would certainly not want to have to make these decisions, especially to have to put the needs of people whose lives I'm not familiar with ahead of my perception of what life is," said Stryker.

Republican leaders said they have been in direct negotiations with Democratic Gov. Roy Cooper on a school-reopening compromise plan for about the past week.

Senate leader Phil Berger, R-Rockingham, wouldn't give details on the changes both sides are willing to make to come to an agreement but said an agreement could be announced as early as Tuesday evening.

"At this time, all I can say is that we seem to be very close to an agreement in principle," Berger said. "It is my hope that we can provide details of an agreement subject to final approval of language in a bill in the coming hours. Things could change but we have made substantial progress. I'm cautiously optimistic that we will reach a deal very soon."

Berger and Sen. Deanna Ballard, R-Watauga, had a news conference about Senate Bill 37 on Tuesday, which would require all districts to provide in-person learning options.

Cooper vetoed the legislation and the Senate failed to override it.

The governor previously said he agrees that students should be in the classroom and would sign a bill to reopen schools, but he said this one didn't have requirements to comply with health guidelines or allow leeway for another shutdown if COVID-19 metrics worsened.

Some parents supporting the reopening of schools were at the news conference.

READ MORE: Can teenagers get a COVID-19 vaccine?

Her son, Holden, is in second grade and goes to school every day. Her daughter, Charlotte, is in fifth grade and is in the classroom on a three-week cohort rotation.

Brinn hopes both of her children will be able to go to school full-time. She said she thinks it will be good for them socially and for her and her husband, who both work.

"I drop my son off every day at school and before school care, and he's there all day, and then I bring my fifth-grader back home with me and she does school from home, two-thirds of the time," Brinn said. "One-third of the time, she's in school, so that's kind of tough because as a working parent, I just get interrupted a lot. I do the best I can, just like any other parent does, but it would be really nice if we have the option of having them both in."

"I like virtual but I miss my friends so I would like to go back to in-person," Charlotte Brinn said.

Wake County students have the option of staying in the district's Virtual Academy.

Tuesday's school board decision could mean her daughter Harper, who is in the fourth grade, goes back to school every day.

Anderson said teachers are doing the best they can with virtual learning but that it's time for students to get back in the school setting and get into a routine.

"It definitely has taken its toll on my children, learning wise," Anderson said. "It's their motivation some days. I think, emotionally, is what we're seeing most lately. It's really taking a toll on them, emotionally. I think that they really thrive off the in-person learning with their teacher and being in the classroom with all of their friends, having things as simple as recess and their PE classes. My kids definitely need that."