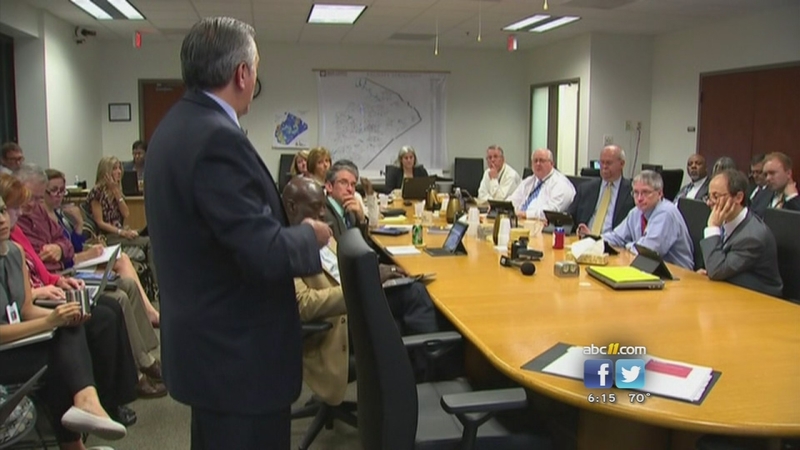 Some turned out at the school board meeting Tuesday night wearing Leesville green in silent support of their neighborhood school that many will be pulled away from thanks to the reassignment plan.

Gentry-Gasper has a kindergartner at Leesville and has been leading the charge to change the proposal.

Wake County Schools staff explained in a work session before the board meeting that more than 500 people had left nearly 1,500 comments on its online forum about the first draft of the enrollment proposal.

They said most comments came from the Leesville community where many families live very near the school's campus and don't want to be reassigned to the new Pleasant Grove Elementary in the Cary-Morrisville area.

Instead of changing their plan to accommodate angry parents, staff are mostly sticking with their original plan, saying they need to alleviate overcrowding. Leesville Elementary is currently 49-percent over capacity.

"No one wants to move but we do have to fill the new schools and we are sure that the parents who attend our new schools will buy in and support that new school as well," Cathy Moore, Deputy Superintendent for Academic Advancement told Eyewitness News after presenting the second draft to the board in a work session.

Staff explained to the board they did hear parents' concerns about how the original proposal would skew Leesville's population toward low-income or high-needs students. The second draft reassigns many of those students to another existing school to balance out the population.

WCPSS is holding three public information sessions over the next two weeks to help answer questions and gather more parent feedback. The meetings will be held at the following locations, all at 7 p.m.

Staff will present Draft 3 to the school board on Oct. 20. It will then be up to the board to make any changes.

A final public hearing will take place on Nov. 3. The board will discuss final changes at its Nov. 17 work session. Approval of the Student Enrollment Proposal is slated for Dec. 1.