North Raleigh neighbors on alert after man allegedly exposes himself 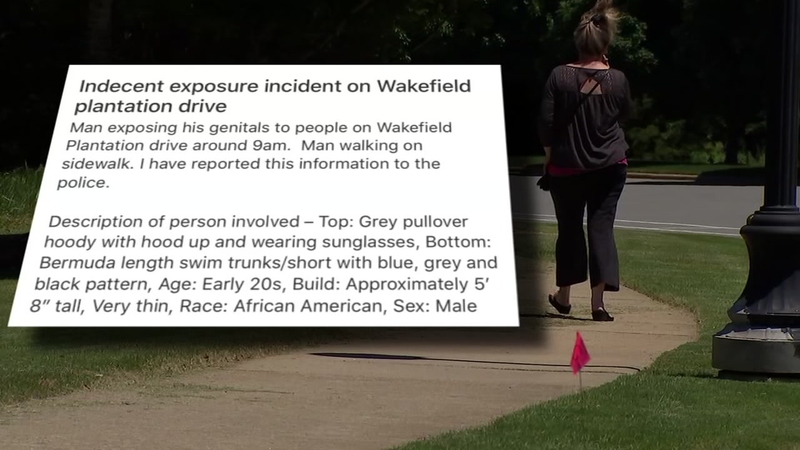 Wakefield flasher has neighbors on alert

RALEIGH, N.C. (WTVD) -- A report of a flasher along Wakefield Plantation Drive has residents of the sprawling North Raleigh neighborhood on alert.

Raleigh Police said they received a report of a man exposing himself while walking along the thoroughfare Tuesday morning.

A post on the Next Door app said the man exposed himself to people walking on the road around 9 a.m.

On Tuesday, Jan Yurcheshen was walking in the area with her friend Gene Mayer.

They live in the neighborhood, which is filled with children.

"It's concerning," she said. "And I think any time you're dealing with children being around you have to be cautious. And you have to talk to your children and have a backup plan and just always be aware of your surroundings."

Mayer also had children top-of-mind, saying, "That's the school bus stop where all the kids go down. So it is concerning."

Mayer said this stretch of Wakefield Plantation Drive also has a greenway so there are numerous opportunities for a flasher.

When one of the people who encountered him posted on the Next Door app, social media lit up.

The man seen Tuesday was described as being in his early 20s.

He was wearing a gray sweatshirt with the hood up and had on sunglasses.

The description also had him wearing Bermuda shorts or swim trunks.
Jan Yurcheshen says she knows what she will do if she encounters the man.

"I think I would take a picture and call the cops," she said.