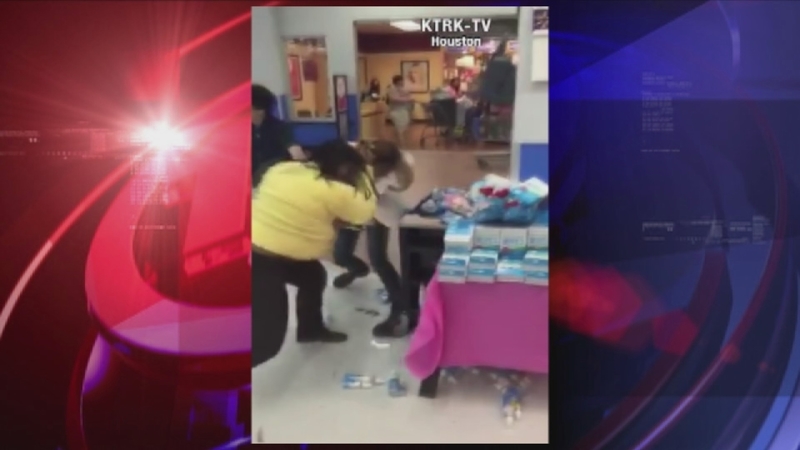 LA PORTE, Texas -- A video is making its rounds on social media that shows a tax worker and a customer getting in a violent fight inside a Walmart.

"Take your poor (expletive) out this store," the Jackson Hewitt tax worker could be heard saying to a customer on video. "Your momma is a (expletive)."

The customer, Jessica Albitz, is then seen head butting tax worker Alice Keener. Keener is then seen fighting back. She takes Albitz by the head and starts banging in on a table nearby. Keener then slams Albitz to the floor.

Albitz told Eyewitness News that the two were in a verbal spat a day earlier when Albitz and her husband went to the Jackson Hewitt tax booth inside Walmart to file their taxes. Keener was not their tax worker, but was just clocking in to work.

Albitz said she and her husband left with out incident. She said she came back to the Walmart the next day to shop, and that's when she ran into Keener again. Albitz said Keener mumbled a profanity at her.

"I turn around and said 'excuse me,'" said Albitz. "I did say something back. She came out of her cubicle and followed me to the entrance."

The argument got out of control, Ablitz said. She showed us a knot on her forehead from the headbutt and a huge bruise on her elbow. A trespassing warning was given to her by police when the fight was over.

In the video, Keener is heard yelling out that Albitz was the instigator.

Eyewitness News has learned that Keener also works as a City of La Porte employee. She works as an EMS billing representative. Eyewitness News made several efforts to speak with Keener, but Keener has not responded to our requests.