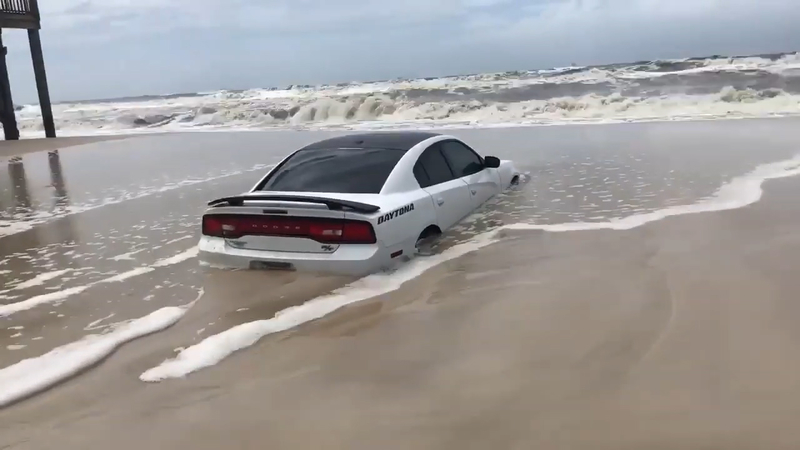 DAUPHIN ISLAND, Ala. -- The worst of Tropical Storm Barry is yet to come, but one Alabama resident is already dealing with a mess after the rising tide swallowed a car parked near the beach.

Footage from Dauphin Island, Alabama, showed the grey Dodge sedan submerged up to its wheel wells in sand as the tide continued to rise around it.

It's not clear why the car was left parked so close to the shore as the storm approached.

Dauphin Island, a community about 30 miles south of Mobile, is under flood and high surf advisories and a flash flood watch and could see dangerous rip currents, according to the National Weather Service.

Forecasters said slow-moving Barry could unload 10 to 20 inches of rain through Sunday across a swath of Louisiana that includes New Orleans and Baton Rouge, as well as southwestern Mississippi, with pockets in Louisiana getting 25 inches.

The storm's leading edges lashed the state with bands of rain for most of the day, and some coastal roads were already under water Friday morning.

Barry was expected to arrive as a weak hurricane, just barely over the 74 mph windspeed threshold. But authorities warned people not to be fooled by that.

"Nobody should take this storm lightly just because it's supposed to be a Category 1 when it makes landfall," Gov. John Bel Edwards said. "The real danger in this storm was never about the wind anyway. It's always been about the rain."