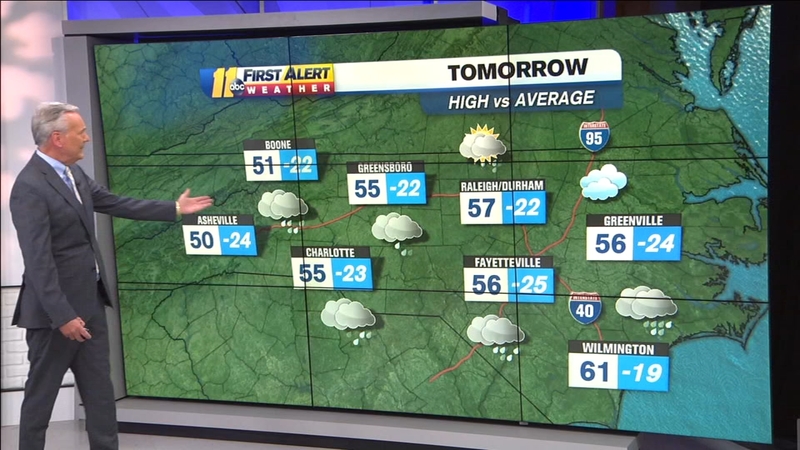 RALEIGH, N.C. (WTVD) -- A weak disturbance aloft will slide eastward along the stalled frontal boundary over the Deep South today. This is already bringing some light rainfall as far north as western North Carolina, and this area will slide right through the Triangle during the day. The best chance of rain will be during the morning and midday hours, then the chance will diminish this afternoon with a surface wave along the front well offshore. Some rain is still likely to wrap around into eastern parts of North Carolina though, so the beaches will stay wet and chilly with a northeast wind; some of that unsettled weather could still linger back into far eastern parts of the viewing area much of the day.

Even though the chance of rain will diminish this afternoon, clouds will be stubborn to break in the moist and chilly northeast flow lingering over the area. This will give us a strong shot at setting a record low maximum for the date. The current record is 58 from 1960.

The sky will begin to clear tonight as high pressure over the Great Lakes and Ohio Valley begins to influence our weather. With a very low starting point, temperatures won't have far to fall to reach the record low of 40 set in 1960. If the sky totally clears and the wind is calm, the record could be broken with much of the area getting into the 30s. It is unlikely to get cold enough for frost, however.

A gradual warmup is expected for tomorrow and Friday, though temperatures remain below average for the middle of May. Due to the cool air aloft combined with the heating of the day, the risk for a pop-up shower is not zero tomorrow or Friday, but if there are any showers, they are likely confined to the mountains, with just a slight chance of them sneaking out toward Greensboro.


Have a great Hump Day!