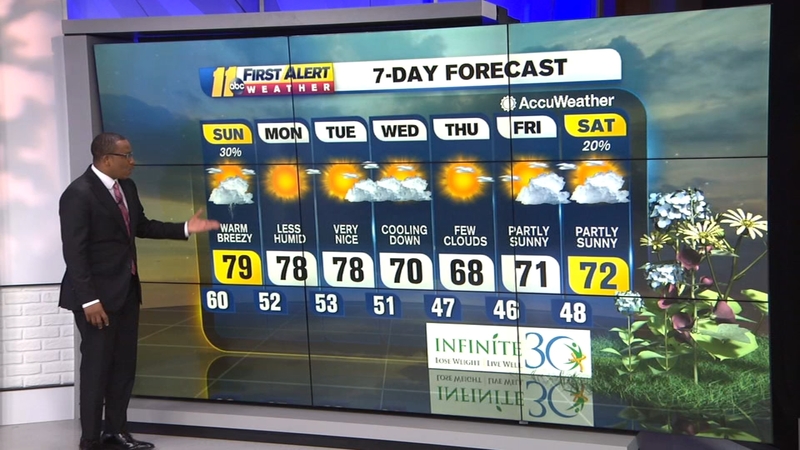 RALEIGH, N.C. (WTVD) -- Following a stormy night last night, spotty showers and even some isolated thunderstorms can still be expected this afternoon, mainly for eastern portions of the Triangle as a weak frontal system passes through the region. Sunshine is expected to break through later today with drier air starting to funnel into the area, and a clear sky is expected by this evening once a westerly airflow ushers in.

Even with a west-northwest wind persisting through the early week, we should still see temperatures staying in the upper 70s and lower 80s for most of the region. High pressure stalled to the south over the Florida Peninsula should keep the region largely dry.

This high pressure to our south is expected to erode and give way to a shifting cut-off low out of the Northeast into the mid-Atlantic. This transition will likely spur the development of a low pressure system right off the mid-Atlantic coast late Wednesday or Thursday, though model guidance is split during the midrange. Depending on how this storm system shapes up, the Triangle could remain dry for most of the week ahead.

A surge of cooler air is expected to accompany this storm system, bringing high temperatures back into the 60s for most by Wednesday and Thursday. Warmer, more seasonable air should return by the end of the week as upper-level ridging builds over the East.

Have a great Sunday!