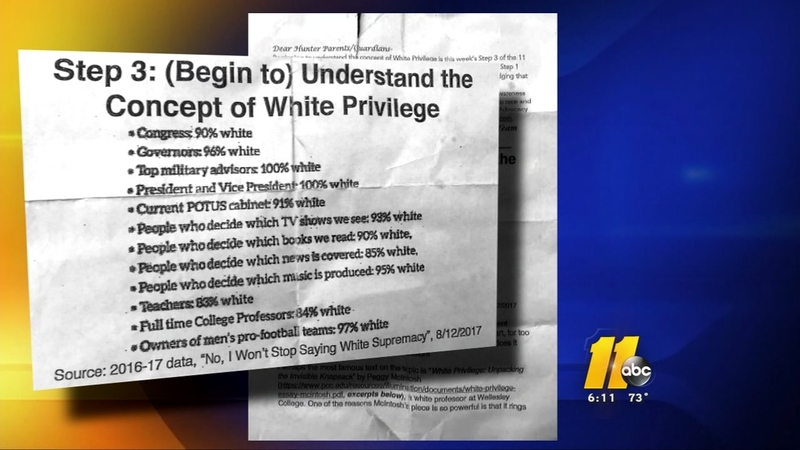 Mother upset about white privilege sheet given to student

RALEIGH, NC (WTVD) -- The mother of a second-grader at Hunter Magnet Elementary in Raleigh is upset about a sheet that explained white privilege was sent home with her child.

Amber Pabon said the two-sided sheet was in his folder when he came home last month.

On one side, it discusses white representation in government, the military, media, and education. On the other, it lists examples of white privilege in society.

"I think the message itself is inappropriate because yes there is racism out here, and they need to learn about it. But let the parents do that," Pabon said. "Because like I said, if she's teaching him the way she knows, it could be completely different from the way I know. And me being part of the black community, I know different from how the white community sees it."

Pabon said she believes the content is also not proper for such a young child.

"He's 8 years old. What does he need to know about racism or white privilege?" Pabon asked.

The sheet is titled "Step 3: (Begin to) Understand the Concept of White Privilege." Pabon said she did not receive any previous steps or forms about the topic.

In a brief note at the top of the sheet, it notes that this is part of an initiative led by the school's PTA Advocacy Team.

It states that the initiative is "focusing on generating awareness and empathy to create a safe and equitable Hunter Community."

Off-camera, multiple members of the school's PTA emphasized the content is aimed at parents, not students.

They added that steps are sent home weekly, and are also e-mailed and posted to the PTA's Facebook page.

Parents have the choice to opt-out of receiving messages on the subject, which Pabon has since done.

Since it began, the PTA noted it has received overwhelmingly positive feedback.