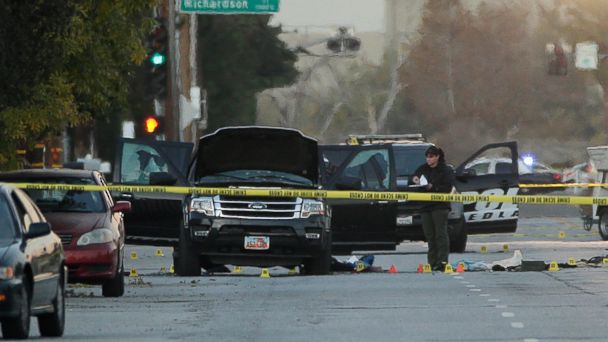 WASHINGTON -- The woman who helped her husband kill 14 people at a holiday banquet for his county co-workers pledged allegiance to the Islamic State group and its leader on Facebook, a U.S. law enforcement official said Friday, providing the strongest evidence to date that the rampage may have been a terrorist attack.

The official said Tashfeen Malik made her posts with an alias and deleted the messages before carrying out the nation's deadliest mass shooting since the Newtown, Connecticut, school massacre three years ago that left 26 people dead. Specific details about her postings were not disclosed by the official, who spoke on condition of anonymity because the person was not allowed to discuss an ongoing investigation.

Malik was a Pakistani woman who came to the U.S. in 2014 on a fiancee visa and married Syed Farook in California. They had a 6-month-old daughter.

Another U.S. official said Malik expressed "admiration" for the extremist group's leader on Facebook under the alias account and said there was no sign that anyone affiliated with the Islamic State group communicated back with her and no signs of any operational instructions being conveyed to her. This official also spoke on condition of anonymity because this person was not authorized to discuss case details by name.

The FBI has been investigating the shooting at a Southern California social service center as a potential act of terrorism but had reached no firm conclusions Thursday. Separately, a U.S. intelligence official said Farook had been in contact with known Islamic extremists on social media. The official spoke on condition of anonymity because the person was not authorized to discuss the investigation publicly.

At the same time, local police to Attorney General Loretta Lynch cautioned that it could have been work-related rage or a twisted hybrid of religion and personal vendetta.

Farook, 28, had no criminal record and was not under scrutiny by local or federal law enforcement before the attack. Friends knew him by his quick smile, his devotion to Islam and his talk about restoring cars.

They didn't know the man authorities say was busy with his wife building homemade bombs and stockpiling thousands of rounds of ammunition for the commando-style assault Wednesday on a gathering of Farook's colleagues from San Bernardino County's public health department.

"This was a person who was successful, who had a good job, a good income, a wife and a family. What was he missing in his life?" asked Nizaam Ali, who worshipped with Farook at a mosque in San Bernardino - the city east of Los Angeles where Farook lived and died.

Authorities say that the couple sprayed as many as 75 rounds into the room before fleeing. They died four hours later and 2 miles away during a furious gunbattle with police.

The pair had more than 1,600 bullets when they were killed. Police said they also had 12 pipe bombs, tools to make more explosives and well over 4,500 rounds of ammunition at home.

Police Lt. Mike Madden, one of the first officers to reach the room, said the carnage was unspeakable, the scene overwhelming: the smell of gunpowder, the wails of the injured, the blood, fire sprinklers pumping and fire alarms blaring. All in a room with a Christmas tree and decorations on every table.

The dead ranged in age from 26 to 60. Among the 21 injured were two police officers hurt during the manhunt, authorities said. Two of the wounded remained in critical condition Thursday.

Nearly all the dead and wounded were county employees.

They were remembered Thursday night as several thousand mourners gathered at a local ballpark for a candlelight and prayer vigil with leaders of several religions paying them tribute. Mayor Carey Davis urged people to "dedicate and commit ourselves to strengthen our families to overcome." The names of the dead were read and participants sang "God Bless America."

Syed Rizwan Farook was born in Chicago on June 14, 1987, to parents born in Pakistan. He was raised in Southern California.

In July 2010, he was hired as a seasonal public employee and served until December of that year, according to a work history supplied by the county. In January 2012, he was rehired as a trainee environmental health specialist before being promoted two years later. Among his job duties was inspecting restaurants.

The soft-spoken Farook was known to pray every day at San Bernardino's Dar Al Uloom Al Islamiyah mosque. That is where Nizaam Ali and his brother Rahemaan Ali met Farook.

The last time Rahemaan Ali saw his friend was three weeks ago, when Farook abruptly stopped coming to pray. Rahemaan Ali said Farook seemed happy and his usual self. Both brothers said they never saw anything to make them think Farook was violent.

They remember when Farook announced that he would be getting married, saying he had met his future wife online and that she was Pakistani. Farook told the brothers that he traveled to Mecca in Saudi Arabia last summer.

They said he was gone about a month before returning to the U.S. with his wife. Malik arrived on a K-1 visa for fiances and with a Pakistani passport in July 2014, authorities said.

The two were married on Aug. 16, 2014, in nearby Riverside County, according to their marriage license. Both listed their religion as Muslim. The couple had a 6-month-old daughter who they dropped with relatives Wednesday morning before the shooting.

Farhan Khan, Farook's brother-in-law, told NBC News that he had started the legal process to adopt the girl. He described Farook as a "bad person," but said he was not radical.

Patrick Baccari, who sat at the same table as Farook at the employee party, recalled he was short on words and inclined to talk about cars, not religion.

However, a friend of a man killed in the rampage said Farook had a heated conversation about Islam two weeks before the attack.

Kuuleme Stephens said she happened to call Nicholas Thalasinos while her friend was talking with Farook at work. She said Thalasinos, a Messianic Jew who was passionately pro-Israel, told her Farook "doesn't agree that Islam is not a peaceful religion." Stephens said Farook replied that Americans don't understand Islam.

Stephens added that Thalasinos did not think their conversations would turn violent.

The U.S. official briefed on the investigation said whatever communication Farook had with suspected extremists was with "people who weren't significant players on our radar" and dated back some time. The official said the communication was a "potential factor" being looked at, but cautioned that "contact with individuals who are subjects of investigations in and of itself doesn't mean that you are a terrorist."

Farook legally bought two handguns used in the massacre and their two assault rifles were legally bought by someone else federal authorities wanted to question. That person's identity was not released.

A profile on a matchmaking website for South Asians that matched Farook's name, California hometown, county health job and Muslim faith said his interests included target shooting in his backyard. Though the date of the posting was not clear, it listed his age as 22.

Details about Farook's upbringing are sparse.

He grew up in a turbulent home but later graduated from California State University, San Bernardino, with a degree in environmental health sciences in 2010.

Divorce records depicted a home divided by abuse. Farook's mother alleged in 2006 that her husband, also named Syed, attacked her while her children were present, dropped a TV on her and pushed her toward a car, according to records.

Rafia Sultana Farook filed a petition for a domestic violence order of protection on July 3, 2006, against her husband. She said she was forced to move out with three of her children because her husband continually harassed her "verbally and physically," according to the divorce records.