'The internet is amazing' says person behind 'world record egg' 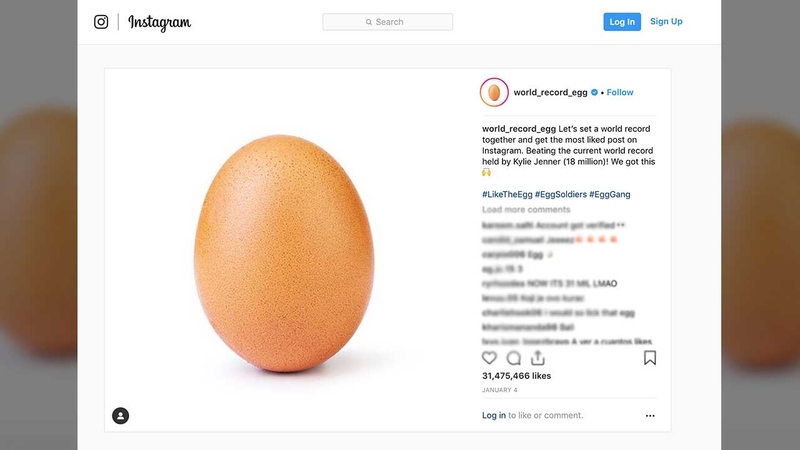 If the average Instagram user had been asked to guess what kind of post would de-throne the most popular post on the site, they probably wouldn't have guessed this.

The "world record egg," a photo of a plain egg with a white background, has tens of millions of likes and counting. That makes it the most-liked post of all time on the site. An Instagram spokesperson confirmed this stat to ABC, saying, "It's true - an egg cracked the record. The most-liked photo on Instagram is now a post with an image of an egg from @world_record_egg. 2019 is going to be eggcellent!"

ABC heard from the owner of the "world record egg" account, who said he or she is an individual living in London. In an email, the Instagram eggs-pert explained where the idea came from.

"While doing dry January I was sitting at home reading an article online about the top 20 Instagram posts of 2018," the email reads. "I thought it would be an interesting experiment to try and beat the record with something as basic as possible."

"Let's set a world record together and get the most liked post on Instagram," the caption reads. "Beating the current world record held by Kylie Jenner (18 million)! We got this."

The post was referring to a photo Jenner shared shortly after the birth of her daughter, Stormi Webster, last year.


Of the egg's fast-tracked popularity, the individual wrote it shows "that the internet is amazing. But it wasn't me that achieved it, it was the Egg Gang."

"I guess it's also a comment on celebrity culture and how fragile and easily cracked it is (pun intended)," the individual wrote. "But really I just thought it would be funny if something as simple as an egg could take the crown."

Though the egg photo was originally posted on Jan. 4, the picture reached another level of attention on Sunday night, when it surpassed Jenner's baby photo.

Shortly after, Jenner herself posted a video in which she cracked an egg on the ground, captioning it "Take that little egg."

Perhaps no one familiar with the ways of the internet will be surprised to learn this, but Jenner's post surpassed 15 million views overnight.