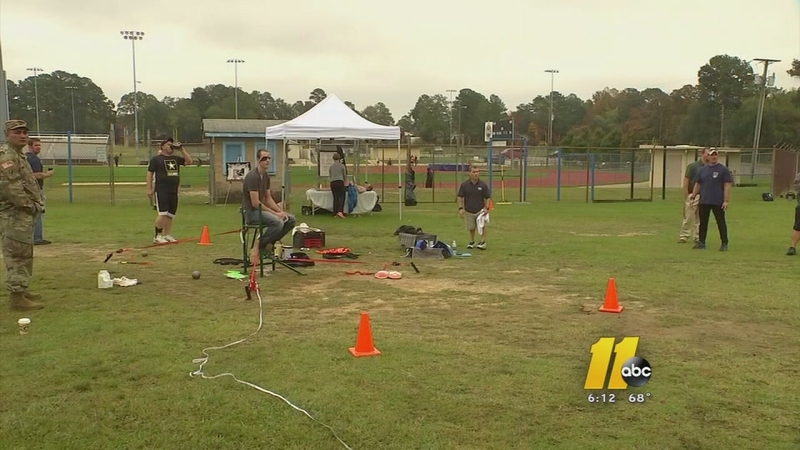 FAYETTEVILLE (WTVD) -- For Kristin Steakley, a military police officer, it was a fall in Afghanistan.

For Sergeant Dylan Gardner, it was a training accident on Fort Bragg that punctured his right eye.

For retired Sergeant Ricardo Villalovas it was an IED explosion, a traumatic brain injury, post-traumatic stress disorder, and the seizures that come along with it.

Some of their injuries are visible. Some of them are not. But there's a common denominator -- determination.

"Military, competitive edge, competitive spirits...It was nice to bring all that back," said Villalovas, who now resides in Winston-Salem.

Steakley, Gardner, and Villalovas are among the veterans and active-duty soldiers competing in the regional trials for the Department of Defense's Warrior Games. They come from bases and cities along the East Coast with hopes of advancing to Fort Bliss trials in February and the DOD national games next summer.

On Thursday, we checked out the track and field and cycling events, held at Reid Ross Classical High School. This year, Fort Bragg serves as the regional host, with events spread across post and Fayetteville all week.

"It gives me something to do," said Gardner, a Raleigh resident who competed in several events, including shot-put. "I can't stay active (duty) too long. I have to do something with my hands or physically, so this gives me an outlet to use."

But for most of those involved, it's about more than competition. It's about self-awareness.

"The biggest challenge is trying to find that new normalcy," said Steakley, who lives with a 35 millimeter rod in her back and ten titanium hooks in her dislocated shoulder. "What's normal? What can I do? What's my new limits?"

Gardner said it's natural for the group to want to stay competitive, and most wounded troops will tell you they don't want anyone feeling sorry for them. The games are way to connect with others who live with the same challenges day-to-day.

And it's about camaraderie.

"There are really long days, and there are tough days," said Villalovas. " And that's one thing about the military that we miss. We don't realize we miss it until it's over, and just that camaraderie through hard times and coming out victorious at the end is just an amazing feeling you can have ."