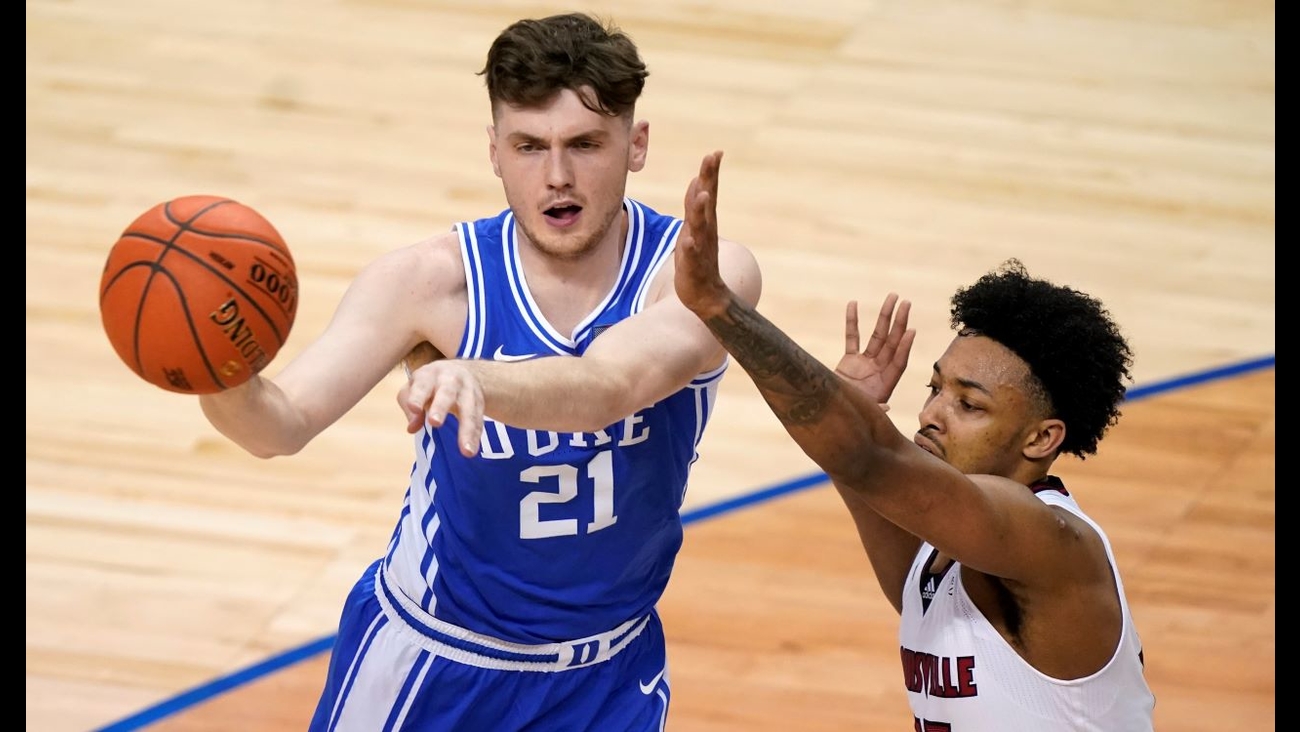 Duke forward Matthew Hurt passes the ball in front of Louisville guard David Johnson. Both Hurt and Johnson have declared for the NBA Draft. (Gerry Broome)

DURHAM, N.C. (WTVD) -- Duke sophomore Matthew Hurt announced Wednesday that he will declare for the 2021 NBA draft and forgo his remaining college eligibility by hiring an agent.

Hurt was named first-team All-ACC and was named the ACC's most improved player after averaging 18.3 points and 6.1 rebounds per game while shooting 44.4% from 3-point range.

The 6-foot-9, 20-year old Hurt is considered one of the most skilled offensive players in the NBA draft, with the second-best 3-point percentage of any player currently projected to be drafted, after Baylor's Davion Mitchell.

With the premium NBA teams are placing on outside shooting in the 3-point crazed era, a player like Hurt will be attractive with his ability to stretch defenses with his elite combination of size and shooting touch.

"The NBA team that drafts Matthew is getting a player very dedicated to his craft," Duke coach Mike Krzyzewski said. "He is already a pro in how he approaches the game and approaches his development as a player and a person."

More than just a catch and shoot specialist, Hurt also ranked favorably in several categories for his ability to score inside the arc, converting 48% of his off the dribble jump-shots, per Synergy Sports Technology, as well as 71% of his post-up attempts and 69% of his transition opportunities.

Best wishes to our guy @HurtMatthew! A walking bucket headed to the league. pic.twitter.com/bk6qmiAWfM

Hurt will be only the second player in the past 30 years of college basketball to be drafted after shooting over 63% inside the arc and 44% outside it, along with Creighton's Doug McDermott.

"Duke has made me become a better player and person, and has put me in a position to take this next step in my career," Hurt added. "I know this has been a difficult year for so many people, and although our Cameron Crazies didn't get to see us play this season, know that we appreciate all the love and support you show our team."

A decorated prospect at the high school level out of Rochester, Minnesota, Hurt won a gold medal with USA Basketball at the FIBA Americas U18 Championship in 2018. He was named Minnesota's Mr. Basketball and earned invites to the McDonald's All-American game and Nike Hoop Summit in 2019.

Duke's season ended when one of its players tested positive for COVID-19 hours before the ACC tournament quarterfinals, forcing the team to withdraw from the event and effectively ending its season. The Blue Devils needed to win the tournament to have a serious shot at making the NCAA tournament field.

"He is a skilled offensive player and it's a shame our fans didn't get a chance to appreciate in person the incredible season he had as a sophomore," Krzyzewski added, "We will miss Matthew and wish him all of the best as he attacks the next phase of his journey."

The Blue Devils have had at least one player selected in 33 of 40 NBA Drafts under Krzyzewski. Coach K has had 67 draft picks since taking over the Duke program, including a Draft-record 41 first-round selections.

The NBA draft will be held July 29.