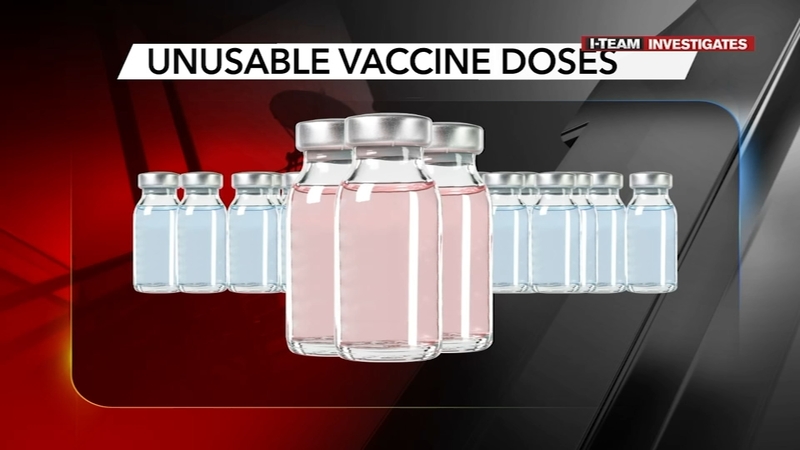 RALEIGH (WTVD) -- More than 600 North Carolina vaccine providers discarded 24,127 doses, according to the latest data from the North Carolina Department of Health and Human Services (NCDHHS).

The doses represent 0.3% of the seven million doses administered statewide but this percent has increased in recent months.

The ABC11 I-Team uncovered 2,300 doses, or 0.1%, were deemed unusable at the end of February. Since February, vaccination efforts have amplified with millions of more doses administered as all North Carolinian adults became eligible.

With millions of more doses administered, it's expected more wasted doses would be reported. COVID-19 vaccine are thrown out due to shipping and refrigeration mishaps along with minor accidents like a broken needle or spilled vial.

Five-hundred additional providers reported waste this month that did not in February. The average number of unusable doses increased from 24 to 40 by provider.

More providers also told ABC11 that lack of patients is becoming a bigger reason why large doses of vaccines expired.

"We do not have the demand that we had seen prior from December to March," said Wilkes County health director Rachel Willard.

Willard said around 400 doses expired back in March that the department was unable to transfer out.

Polk County health director Joshua Kennedy reported a similar issue behind many of the 1,645 unusable doses in Polk County.

"At the time of accepting allocations of the vials (week prior to actual physical receipt) we had a fairly high demand for vaccine in the region. However, like most communities around the time of spring break, demand suddenly dropped off as more regional providers came online and supply increased," Kennedy wrote in an email.

He explained the short shelf-life of the vaccine and Pfizer shipping it in large quantities also played a factor.

Despite the drop in demand, Wilkes, Polk and Lee County have vaccination rates lower than the state's average.

"I think a lot of our smaller communities are really struggling with this and just trying to do the best that we can and trying to push forward and helping everyone reach that goal and that threshold so we can lift those public health restrictions," Willard said.

Both Willard and Kennedy said they have not requested more vaccines for weeks to help reduce waste.

Wake County Health Department's unusable doses has also greatly increased over the last two months. The department reporting 653 more waste than in the end of February. Duke University Hospital also ranked as one of the top providers for wasted doses. Both providers report a percent of waste under the statewide average.

"We remain committed to never trying to waste. However, aversion to waste is not as high as it was when vaccine supply was extremely limited. Now that supply is higher, we are following the guidance of the state and have chosen to vaccinate those who come to our clinics and are right in front of us at that time instead of rescheduling or turning individuals away," a spokesperson for Wake County wrote in an email.

As vaccination efforts shift away from mass clinics toward more providers targeting smaller volumes of people, officials anticipate a slight increase in doses that expire.

"Because our clinics are now accepting walk-ins, dosages can no longer be as closely calculated as they had been for scheduled appointments. As a result, vials are being opened to accommodate walk-in traffic, and that can result in some wastage if the doses remaining from the vial are not needed prior to expiring," a Duke Health spokesperson wrote in an email.

The COVID-19 vaccines have specific storage and expiration requirements that create an added challenge for officials seeking to preserve and maximize doses.

A spokesperson for NCDHHS said the goal is to administer every dose but acknowledged it is not the top priority.