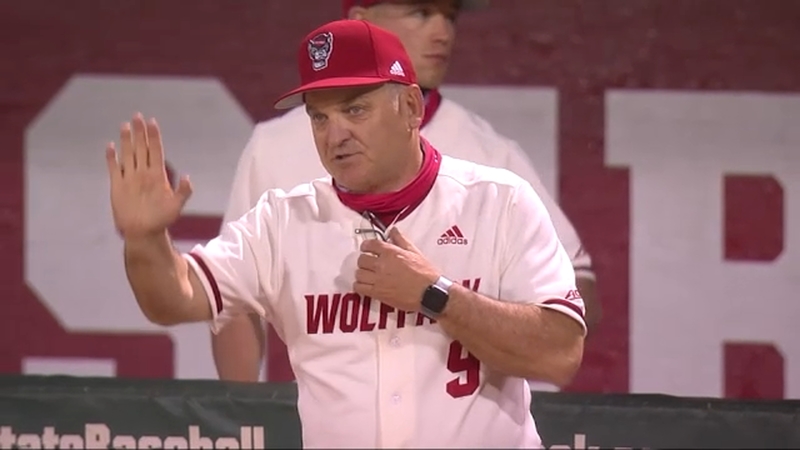 That's just the start the pack were hoping for. They now await the winner of Vanderbilt vs. Arizona.

The College World Series consists of eight teams playing in two double elimination brackets. The winners of each bracket will then play a best of three series starting June 28.

The wolfpack are looking to win its first ever College World Series. It would also be only the third time an ACC school has won the event--with Wake Forest doing it in 1955 and Virginia in 2015.

The Wolfpack (36-18), who knocked out No. 1 national seed Arkansas in the super regionals last week, continued its postseason roll in the first CWS game since 2019. The 2020 event was canceled because of the pandemic.

NC State got out to a 2-0 lead in the first inning on Butler's homer to right off Pac-12 pitcher of the year Brendan Beck. After Devonte Brown barely cleared the fence in right-center in the fourth to give NC State at least two homers in 17 of its last 21 games, Butler's two-run bloop single made it 6-0.

Beck (9-2) left with two outs in the sixth having allowed six runs, three earned, on seven hits. He walked two and struck out 10.

Johnston, who allowed seven runs in three innings in a 21-2 loss to Arkansas in NC State's super regional opener last week, limited the Cardinal to Tim Tawa's solo homer and a single through six innings.

Johnston wore down in the seventh. He allowed four straight hits, including Christian Robinson's two-run homer inside the right-field foul pole, before closer Evan Justice came on with two runners on base and no outs. Stanford got another run when Vojtech Mensik couldn't handle Tawa's hard grounder to third with the bases loaded.

Butler singled for his fifth RBI during a four-run ninth inning for the Wolfpack, and Justice finished for his 12th save.

The game ended on an unconventional double play. Pinch-hitter Carter Graham grounded to second, with J.T. Jarrett flipping the ball to Jose Torres covering the bag. Stanford's Tommy Troy, running from first to second, didn't slide on the play and was called for interference. Second-base umpire Billy Van Raaphorst's call was upheld on video review.