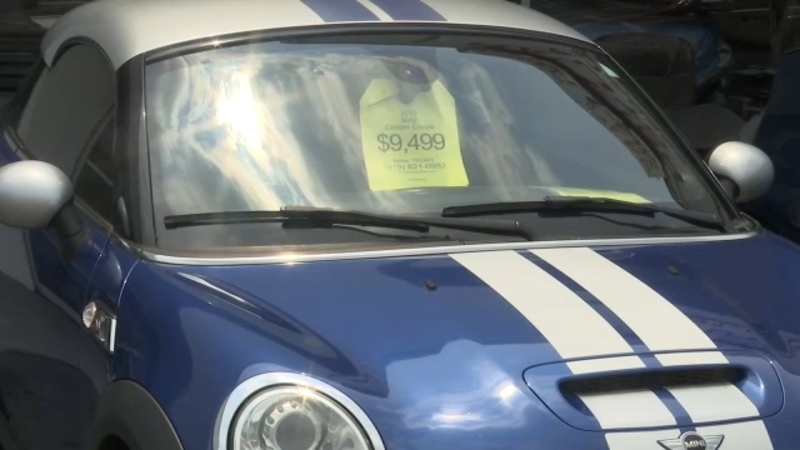 Earlier this week, President Biden addressed rising prices, citing supply chain logistics impacted by the COVID-19 pandemic as a driving forces, sharing he believes the majority of increases will be temporary.

"I want to be clear. My administration understands if we were to experience unchecked inflation over the long-term, that would pose a real challenge to our economy. So while we're confident that isn't what we're seeing today, we're going to remain vigilant about any response as needed," President Biden said.

At West 94th Street Pub in Durham, Manager Kerry Bryant are trying to work around the increased prices.

"Food prices have skyrocketed, and we're having to substitute and try to figure out what we can bring in that we normally have on our menu that we feel like is quality," said Bryant.

The automobile industry has also seen sharp increases, specifically in used and rental cars. Used car prices are up more than 45% over the past twelve months, while new cars are just about 5% more expensive. Analysts point to a number of factors behind the rise, including stimulus money, chip shortages, supply chain limitations, and fewer new cars being sold.

"The sales have almost doubled. And it's just a matter of us getting inventory, we'd be able to sell anything we can get inventory for," said Lloyd Price, owner of Raleigh Auto on Capital Boulevard.

That's not what Price anticipated at the beginning of the pandemic.

"We thought we may have to close, it may be that way. But it was not that way," said Price.

He noticed a shift in consumer habits last summer.

To address this, they're trying to increase their inventory.

"We're trying to put a good vehicle out for sale. And we're trying to give value. We try to take care of the customers needs if there's a problem," said Price.

While new vehicle prices have not risen as much over the past year, the CPI notes they did increase by 2% in June 2020, the index's largest single-month rise since May 1981.

Dr. Henry McKoy, the Director of Entrepreneurship at NC Central, believes there are several factors behind the widespread price increases.

"I think it's just kind of a shift in the economy, but again I feel like the inflationary pressures will settle and we'll be fine," said Dr. McKoy.

He also pointed to increased wages in several sectors, including the restaurant industry, leading to consumers paying higher prices.

"I think it's one of those things that the market is resettling to a post-pandemic world. I certainly think the supply chain is going to get back (to running) efficiently, we'll have technologies that will come back online, chip manufacturers that have created issues around the automobile industry I suspect will go back to normal. I think there will be a kind of settlement in the workplace, so I don't think this is a long-term issue around inflation. Now whether is lasts a few months or lasts a bit longer, that remains to be seen," McKoy said, who added interest rates have remained low.
Report a correction or typo
Related topics:
personal financencinflationeconomybusinesspersonal financepoliticscovid 19 pandemic
Copyright © 2022 WTVD-TV. All Rights Reserved.
TOP STORIES
FTC sues Walmart over scammers' use of money transfer services
NC GOP unveils state budget; House backs Medicaid expansion path
Some pharmacies limiting Plan B pill purchases as demand spikes
Workers fired for not joining company's daily Christian prayer: EEOC
NC abortion legal battle looms amid standoff between AG and GOP
FDA advisers recommend updated COVID booster shots for fall
Biden administration plans to send out thousands of monkeypox vaccines
Show More
Elmo gets COVID vaccine in new Sesame Workshop PSA
ABC11 to present Raleigh's July 4th fireworks show at Dix Park
Man accused of killing 9-year-old in Durham on trial in federal court
Police investigating two shootings in Cumberland County
Why you should pay down your credit cards right now
More TOP STORIES News