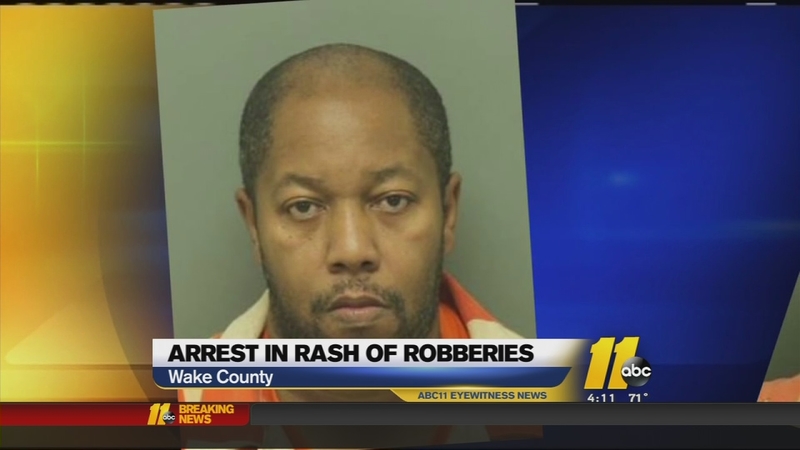 RALEIGH (WTVD) -- A Raleigh father of four is behind bars accused of robbing a Family Dollar store and suspected of robbing six more including the one he use to manage.

Details of what investigators believe are inside jobs were revealed in a search warrant just made public.

In it, Raleigh police claim that a series of robberies, many of them armed robberies, began back on July 29 at the Family Dollar store on Hodge Road in Knightdale.

A clerk was robbed of bank deposit bags as she left the store one morning. She told investigators that she had noticed that Jamie Williams, a former manager at the store, had been watching the store for days from a nearby parking lot in his gold Chrysler 300.

Police say Family Dollar officials told them Williams had been a manager at the Knightdale store but was fired after a bank bag went missing.

According to the search warrant, a Knightdale detective talked to Williams about the case at Bojangles' on New Bern Avenue but apparently didn't have enough evidence to arrest him.

A few weeks later, on August 22, a man approached a clerk outside the Family Dollar Store in Mini City on Capital Boulevard in Raleigh and tried to grab a bank deposit bag from her. She told police when she resisted he put a gun to her side and threatened to shoot her.

Then on September 7, the manager of a Dollar General store on Falls River Avenue in Raleigh was approached by a man with a box cutter right after she left and locked the door to the store. Again, bank deposit bags were stolen, according to the search warrant.

Investigators say Williams had earlier interviewed for an assistant manager position at that store and was scheduled to start on August 21 but failed a background check.

The next day, two men with a gun came in the store and forced a clerk to open the safe. As the men emptied a safe and the cash register, they ordered the clerk to the bathroom.

Less than a week later, on September 28, two men with a gun walked in the Family Dollar store on New Birch Drive in Raleigh. Again, a clerk was forced to open the safe. While one of the men emptied the safe and a cash register the other forced employees into a back room.

Police asked a Family Dollar regional manager who had fired Williams to look at surveillance video from the store that showed a man walk up to the door and look inside the store while the robbery was underway. The manager, according to investigators, positively identified that man as Williams.

On October 11, a man entered the Mini City Family Dollar and ordered the clerk to open the safe and remove the money.

On November 9 they say they tracked Williams' car as it went to several Family Dollar stores in Raleigh and ended up at the Poole Road.

At one point, they write, there were three men in the car.

They then tracked the car to a Cookout fast food restaurant on New Bern Avenue and an address on Centennial Ridge Way near NC State University where an attempted robbery was reported by the assistant manager of the Poole Road Family Dollar. He told police he left the store, went to Cookout, then to his home on Centennial Ridge Way where he was approached by two men with a handgun who fled in a four door sedan.

Police say they stopped Williams' car in North Raleigh and the victim of the attempted robbery was brought to the scene. He identified the car as the one used by the men who robbed him and also said he was "100%" sure Williams was one of the robbers. He then said he was "90%" sure the other man in the car was the second suspect.

That man, Vincent King, was arrested along with Williams. But so far the two have only been charged with conspiracy and armed robbery in connection with the September 22 heist at the Family Dollar on Poole Road.

A member of Williams' family who didn't want to be identified said the family was shocked by his arrest and the allegations against the father of four children.