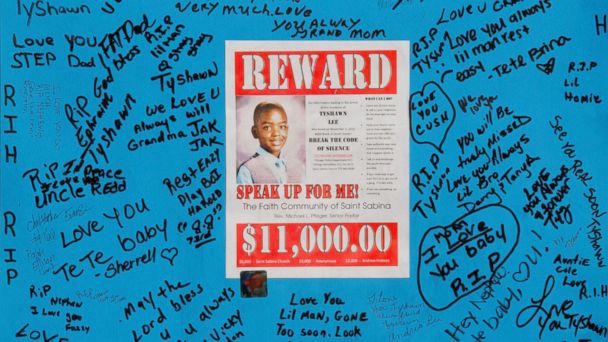 AP
By DON BABWIN
CHICAGO -- A Chicago man initially planned to cut the fingers and ears off the 9-year-old son of a member of a rival gang but ended up luring the boy into an alley with the promise of a juice box and shooting him dead, authorities said Tuesday.

Dwright Boone-Doty, 22, was charged Monday in the Nov. 2 killing of Tyshawn Lee. He has been jailed since a November arrest on unrelated gun charges. Prosecutors also charged him with shooting two people about two weeks earlier, including a 19-year-old woman who died from her wounds. Authorities said revenge was also the motive in that attack, which the 20-year-old male victim survived.

Tyshawn Lee was one of 400 homicide victims in Chicago last year, but the fourth-grader's death shocked the city because, according to police, he was killed for no other reason than to punish his father.

"In nearly 30 years of policing I have never witnessed such a hateful act of treachery and savageness toward an innocent child whose life barely had the chance to flourish," Interim Chicago Police Superintendent John Escalante told reporters Tuesday. "And sadly (Tyshawn) paid the ultimate price for gang violence, senseless gang violence, that plagued his neighborhood."

Lee had set his basketball down and jumped onto the swings in Dawes Park when Boone-Doty approached him, Cook County State's Attorney Anita Alvarez said at the news conference. Boone-Doty dribbled the boy's basketball a few times, gave it back to him and offered to buy him whatever he wanted from a store, she said.

They then walked off together into a nearby alley, where Boone-Doty shot Tyshawn several times at close range, Alvarez said. She said two cohorts, 27-year-old Corey Morgan and another man - identified by police as Kevin Edwards - were in on the plan and followed Boone-Doty and Tyshawn into the alley in an SUV.

Alvarez said Boone-Doty later talked about how he shot Tyshawn, laughing as he described how the boy when he was shot "couldn't take it no more." Neither she nor Escalante would explain Boone-Doty's admissions about the shootings. But a law enforcement official who is not authorized to speak about the case and only spoke on condition of anonymity said that Boone-Doty told what he had done to a fellow jail inmate who was secretly wearing a recording device for police.

Morgan is jailed on murder charges. He denies any involvement in the shooting. Edwards remains at-large and is believed to be hiding in Iowa, according to U.S. Marshals.

Police say Tyshawn was targeted because of his father's gang affiliation and a recent series of shootings between two rival gangs, the Gangster Disciples and the Black P Stones, in the Auburn Gresham neighborhood on Chicago's South Side. Investigators believe that Tyshawn was killed in retaliation for the Oct. 13 gang killing of Tracey Morgan, Corey Morgan's 25-year-old brother.

Escalante would not say if investigators suspect that Tyshawn's father was involved in Tracey Morgan's killing. However, he said the investigation into that killing remains under investigation.

According to Alvarez, after the attack on Tracey Morgan, his brother, Boone-Doty and Edwards went looking to retaliate. She said they even "set up surveillance of Tyshawn's grandmother so he could kill her in order to draw out the rival gang members."

She said Boone-Doty originally planned to kidnap the boy and torture him by cutting off his fingers and ears.

Five days after Tracey Morgan was killed, Boone-Doty walked up to a car on the South Side and opened fire, killing 19-year-old Brianna Jenkins and wounding 20-year-old Deshari Bowens, Alvarez said. She said Boone-Doty saw Bowens' dreadlocks and "believed him to be a rival gang member," but that Jenkins and Bowens were innocent victims.

Boone-Doty was arrested in November and charged with illegal gun possession. Alvarez said he was charged with murder in Jenkins' death and attempted murder in the wounding of Bowens after ballistics tests linked one of Boone-Doty's weapons to the attack on them.

Public Defender Amy Campanelli, whose office is representing Boone-Doty, declined to comment about the charges.

Boone-Doty was paroled from the Illinois Department of Corrections in August after serving about two years on a five-year sentence in a drug case.