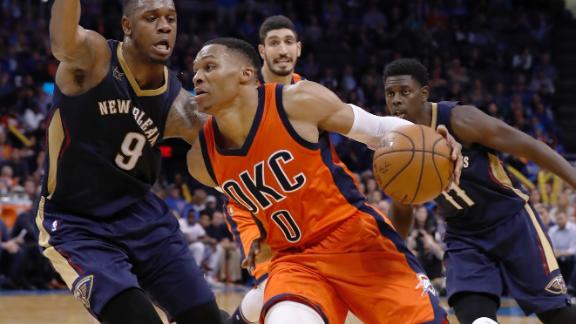 Milwaukee Bucks coach Jason Kidd, one of the foremost triple-double artists in NBA history, believes Russell Westbrook can average a triple-double this season.

Kidd, who is third of all time in triple-doubles with 107, told ESPN that he could only dream of doing what Westbrook is doing right now. He has been most impressed with Westbrook's ability to win during his streak of five straight triple-doubles -- and do it all without Kevin Durant.

"It can be done," Kidd said of averaging a triple-double in a season, a feat that hasn't been matched since Oscar Robertson did it in 1961-62. "I have always said I think it could be done. You got to have a special player and I think we are looking at a special player."

Westbrook is on a tear that hasn't been seen in decades. He became the first NBA player to record five consecutive triple-doubles since Michael Jordan did so in 1989. On Sunday, the Thunder point guard had 28 points, 17 rebounds and 12 assists in a 101-92 win over New Orleans. Westbrook did also have 10 turnovers, becoming the first since Kidd in 2000 to register double digits in all four categories.

"He is athletic," Kidd marveled. "[But you need] guys scoring the ball [on your team]. Assists is hard to get.

"But understand he is doing this without KD. That is what makes it even more special."

Kidd ranks third on the all-time triple-double list behind Robertson (181) and Magic Johnson (138). Westbrook is currently sixth with 47 career triple-doubles and is 12 behind Larry Bird (59). Wilt Chamberlain is in fourth place with 78.

The Thunder (13-8) have won all five games during Westbrook's triple-double streak and were 8-2 going into Atlanta when the point guard notches a triple-double.

Westbrook's 10 triple-doubles in 21 games this season is the fastest anybody has done that since Robertson needed only 12 games to do so in 1961.

Magic Johnson, who averaged a double-double in points and assists nine times in his career, came close in 1981-82 to averaging a triple-double when he finished with 18.6 points, 9.5 assists and a career-high 9.6 rebounds.

Kidd played from 1994 to 2013, much of his career spent during a time when the game was considered to be more physical with more dominant big men to contend with on the boards. But the future Hall of Famer says he would not be able to duplicate what Westbrook is doing even if he played his prime in today's more perimeter-oriented and offensive-minded NBA game.

"No. No," Kidd says. "He is athletic. I wasn't athletic like that. You put basketball IQ, thinking the game, and then you put it with what he is doing athletically -- it is like LeBron, he is another one that can do it. For me, it was always the scoring part that was the hardest."

"The way the game is being played, shooting a lot more 3s, there's a lot more rebounds to be had," Kidd adds. "But he is playing at a very high level. He also doesn't get enough credit for his basketball IQ."