Banned books and a lack of librarians: reading in North Carolina prisons 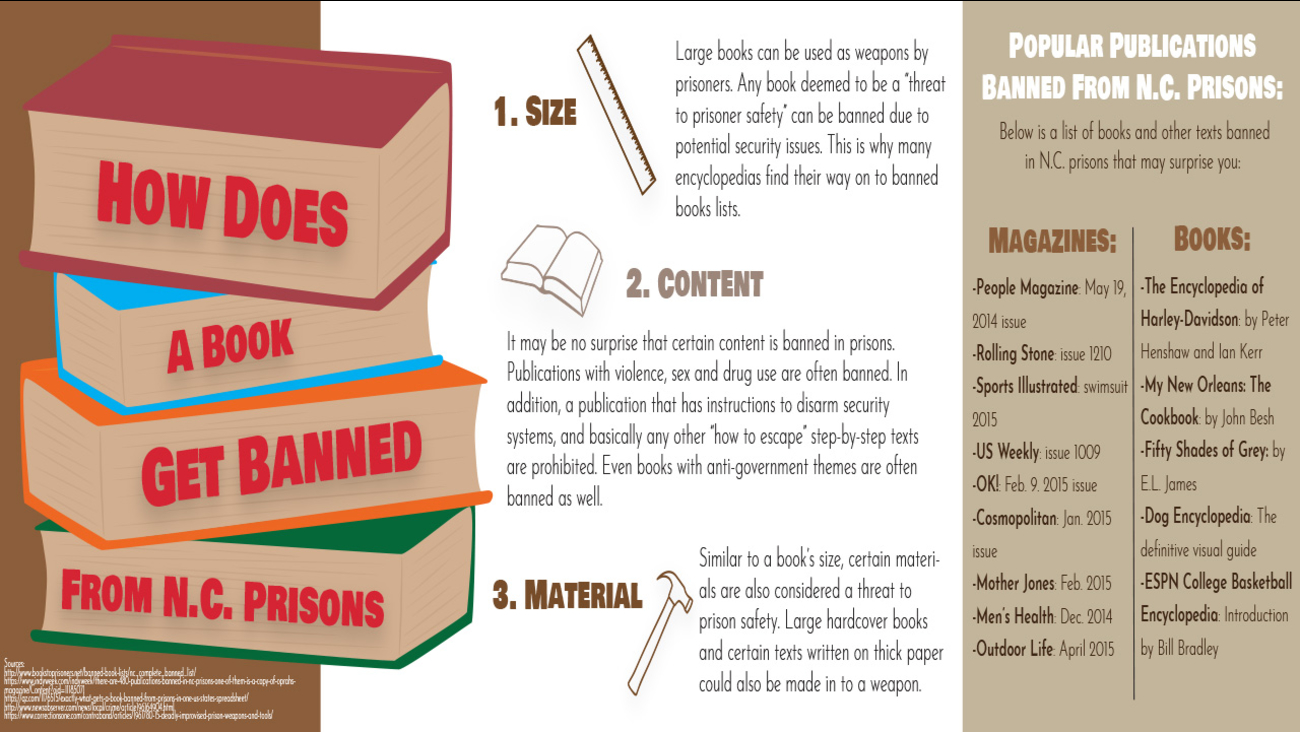 Without a librarian, advocates for prisoner education like Missen are wondering what internal force will speak out for those unable to speak for themselves.

RALEIGH, NC -- Cliff Missen is an advocate for prisoner education who has interacted with thousands of inmates, but he doesn't forget an inmate's first experiences at a prison book club.

"Inmates show up for a meeting with a book from the 1800's, and these people are crying," Missen said. "Because for the first time, they feel like they're inside somebody else's skin and they can see where they're coming from."

If an inmate in a North Carolina prison wanted to read "Fifty Shades Darker," comics from "The Watchmen" series, Maya Angelou's autobiography or even just an encyclopedia, he would leave the prison library empty-handed.

The North Carolina Department of Public Safety's "Disapproved Publications Report" includes nearly 500 titles deemed pornographic, violent or otherwise inappropriate for prisoners. More mundane publications like dictionaries and issues of "Rolling Stone" are also on the list. After the North Carolina American Civil Liberties Union challenged the list in January, the DPS set out to review the entire collection.

The list has been tailored to promote inmate and guard safety, but civil and prisoners' rights advocates like Missen, an associate professor in the School of Information and Library Science at the University of North Carolina at Chapel Hill, have criticized the breadth of the list.

Similar lists in New Jersey and Texas prisons have drawn national attention to the issue, but Missen has pointed to the list as only one example of shortcomings in prisoner education in North Carolina.

Despite accusations of censorship, though, prison safety is the goal of the list. Texts that might suggest how to escape from prison, or how to kill a prison guard, are barred for obvious reasons.

Department of Corrections deputy director of administration Carlton Joyner has worked for the DOC for more than three decades. He said the list of disapproved publications is always in flux.

Publications requested by or sent to prisoners are skimmed upon arrival. If the material is marked inappropriate, it will be banned for 12 months. Joyner said books are not added to the list unless received, reviewed and flagged.

The DOC's policy once prohibited hardcover books larger than 8.5" x 11" and 2" thick, as well as spiral-bound notebooks, for space restrictions and the rare safety concern. Such safety concerns could be the use of a larger, hardcover text as a blunt weapon or for hiding illicit materials. Joyner said the restriction policy is under review, but that all books from the size-restricted categories were removed from the list.

"If a book is currently on the list, it will be based on content solely," Joyner said.

Joyner said he wasn't sure of the reasoning for individual titles, noting again that titles are barred exclusively when prisoners attempt to order them or are sent the publication.

Now, with the entirety of the bank of disapproved publications under review, the Department of Public Safety will apply restrictions based on content alone and the list will likely shorten dramatically.

But just this January, inmates were also denied access to Michelle Alexander's, "The New Jim Crow: Mass Incarceration in the Age of Colorblindness." The North Carolina ACLU called the ban "cruelly ironic," and successfully pressured the DPS to lift the ban last month.

Some texts are "fundamentally incompatible" with operating a prison safely, Brook said, but he explained that the logic behind banning the Alexander book was unclear.

"It's about the mass incarceration of young black men, who are disproportionately impacted by the criminal justice system. That's a reality anyone incarcerated in North Carolina is aware of, day in and day out," Brook said. "So why, then, are prisoners being denied access to it?"

Although black men make up less than 20 percent of the state population, more than half of North Carolina inmates are black males.

Further, Brook said the vast majority of the incarcerated will be released, and that their rights aren't forfeited behind bars. Brook said the censorship of a book that critiques the very system that victimizes many inmates is ironic at best. At worst, he said limiting educational materials can cripple an inmate's prospects of staying out of prison after release.

"I think fully walling prisoners off from society is not likely to help with reintegrating," he said.

The DPS has affirmed its dedication to preserving safety without limiting prisoners' rights to information and education by focusing exclusively on content-based regulations on publications in response to the ACLU's actions.

A 2016 study published by the RAND Review found inmates who participated in any form of correctional education - from book clubs to accounting classes - were up to 43 percent less likely to return to prison.

Missen credited the ability of literature to instill inmates with empathy for the link between reading and reduced recidivism rates.

He said attitudes toward inmates and about prisons as a whole in the United States are more punitive than constructive, which is at odds with prison systems in other developed nations. Banned books, understaffed libraries and limited resources are symptoms of a toxic national prison culture that repeatedly fails its captives.

In North Carolina, although all prison facilities are required to house a library, there's one actual librarian dedicated to the entire system, totaling nearly 40,000 inmates. The result of insufficient prisoner education is often higher rates of recidivism.

The sanctuary of a fully functioning library, Missen said, should be the bare minimum for inmates. He described a "hugely dysfunctional" situation in American prisons where inmates and staff are afraid of each other. Trust and education are keys to closing that gap, Missen suggested.

Libraries in North Carolina prisons are currently staffed by "qualified staff members or community volunteers," as DOC policy 1101a dictates.

Missen said retaining a single librarian and a workforce of fill-ins for 55 prisons is "insane."

Joyner said he's manned the library himself - as a state prison employee after his time as a correctional officer - but couldn't recall the training that the policy mandates. He said he didn't remember the system ever working differently than with volunteers and appointed employees manning the library.

"We don't have an employee whose job is to be a librarian," Joyner said. "Generally, it's an individual who we call a programs person, and one of their responsibilities will be to supervise the library."

He said that employee is mostly concerned with ensuring books are returned after being checked out by inmates.

Without a librarian, advocates for prisoner education like Missen are wondering what internal force will speak out for those unable to speak for themselves.

Had the ACLU not been tipped off, it's likely that nobody would have intervened to challenge bans on "The New Jim Crow" and other questionable texts. Without librarians in prison libraries, that oversight will continue to come from external forces.

Meanwhile, Brook said limitations on education behind bars will only end up harming the imprisoned and the communities they'll eventually return to.

"It's in all of our interests to have a rehabilitative component to our prisons, and that we help prepare folks who are going to be back on the outside to succeed on the outside," he said.

This article was submitted to ABC11 by UNC Media Hub.