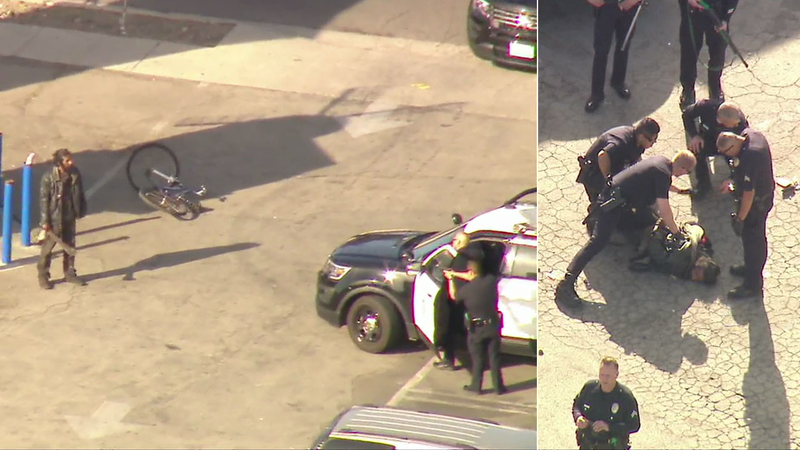 VIDEO: Man with machete taken down by officers in Pacoima

PACOIMA, LOS ANGELES -- Authorities subdued and took into custody a man who was walking around a Pacoima parking lot with a machete Thursday afternoon.

The incident unfolded around 4:51 p.m. when authorities received a call about a man panhandling and carrying a machete in the 11600 block of Glenoaks Boulevard.

Efren Rodriguez said the man, who is a known homeless person in the area, was threatening people with the weapon.

The man continued walking around with the machete as he ignored commands to comply with officers. Officers then shot the man with rubber beanbags.

Witnesses hiding in businesses at the strip mall captured the frightening moments on cellphone video.

"The guy was standing outside with a machete. He was by the water tower. A lot of officers came by. They drove up, got out of their cars and tried talking to him at first. After a while, they started firing at him with their little beanbags. It was pretty scary," Maria Torres said.

The man eventually went down to the ground and stayed there while officers tried to get him to raise his hands and give himself up.

Authorities then appeared to hit the man with bean bags again and were able to take him into custody without further incident.

Witnesses said the LAPD handled the dangerous confrontation well and thanked them for their service.