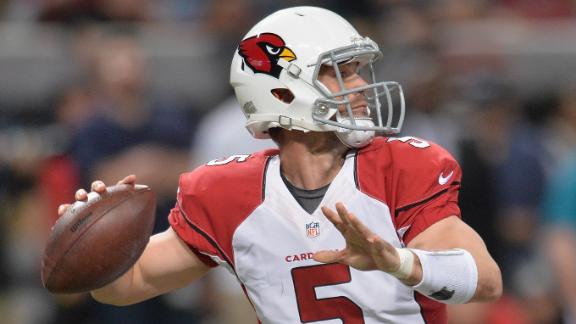 Arizona Cardinals quarterback Drew Stanton had his right knee scoped on Wednesday after he showed up at work with swelling, sources confirmed to ESPN's Chris Mortensen, leaving his availability for the playoffs in question.

Stanton is on antibiotics, and there is no timetable for his return. The Cardinals are waiting to see how he recovers.

Later Friday, a Cardinals official told ESPN NFL Insider Adam Schefter that "there is a realistic chance for him to return" this season.

"He's at home and will stay there and rehab over the weekend and be ready to go next week, hopefully," coach Bruce Arians said.

Doctors drained the knee and discovered an infection.Doctors were surprised because he had not had surgery for the knee injury and suspect the cause of the infection came from outside treatment Stanton was receiving in trying to get the knee to heal.

"I have no idea about infections and all that," Arians said. "You talk to doctors about that stuff. He's on schedule for next week."

Ryan Lindley will start for the Cardinals in Sunday's regular-season finale against San Francisco. Lindley is getting the call after Arians initially said rookie Logan Thomas would start against the 49ers.

Previously, Arians had said there was an "85 percent" chance Stanton would return for the playoffs.

News of Stanton's scope and infection was first reported by NFL Network.

Drew Staton Return Likely Pushed Back
Drew Stanton underwent arthroscopic surgery on his knee Wednesday, likely pushing back his return for the Cardinals.