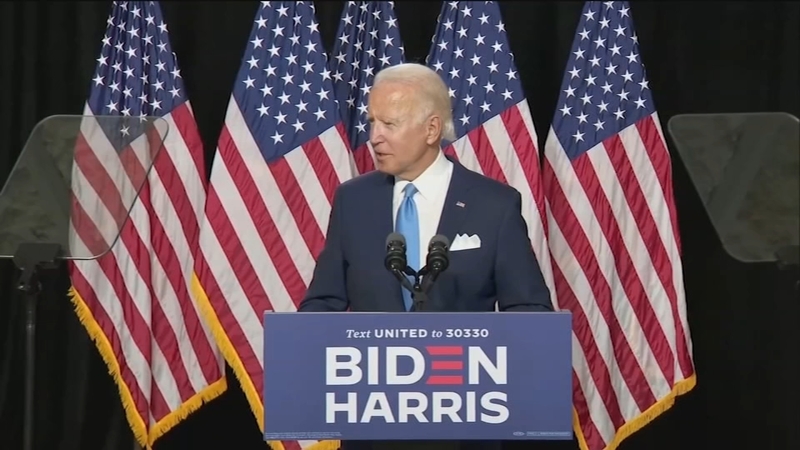 RALEIGH (WTVD) -- He now gets to drop "presumptive."

Vice President Joe Biden is the official Democratic Nominee for President of the United States, and halfway through the most unconventional convention in history, a clear strategy is emerging trumpeting the longtime public servant's character.

'We've got to teach our young people:' North Carolina nurse takes stage at DNC, encourages Black women to vote
"Most of us have never known a person like Donald Trump, much less a political figure," Rep. David Price (D-North Carolina) said. "Biden has this character and decency. It's not just that Joe Biden is a nice guy you want to get a beer with. It's much more important than that. The qualities of empathy and relatability, the ability to work with certain people. The ability to not let political differences become personal bitter divisions. That's the sign of an admirable human being and an effective president and effective leadership."

At DNC, Jill Biden gets personal about family's challenges

"That word empathy keeps occurring because it's so missing from the incumbent president but because Joe Biden exemplifies it. I think that's important to get across."

Everything to know about the 2020 Democratic National Convention

Biden, of course, served as President Barack Obama's right hand man for eight years. Wednesday night, Obama is sure to brag about Biden being the right choice.

Though the 44th President might be the last speaker of the night, that does not necessarily mean he will be the most important; the nominee for Vice President - Senator Kamala Harris - will also be in the spotlight.
"She's a warm person, she's funny and interesting," Price said. "She has to communicate that. She's not just the candidate, the Senator, but someone who you can identify with. The fact that she's a prosecutor will serve her well in terms of her ability to hone in, to be forceful, but there also has to be a sense this is someone we trust and basically an empathetic and decent person."

Harris is expected to highlight her own upbringing as a child of immigrants (her father was Jamaican and her mother Indian).

"The message really does have to be that we are a nation of one, that we are all striving for the same balance and acceptance and livelihood and integrity and that's pretty exciting," North Carolina Chief Justice Cheri Beasley said. "I think what Joe Biden and Senator Harris bring are very new and fresh perspectives."

Beasley, the first Black woman ever to be Chief Justice of the North Carolina Supreme Court, added that she's inspired by Harris' selection as the VP nominee and her appeal will be key with younger voters.