2020 Census will continue until October 31 after successful legal challenge 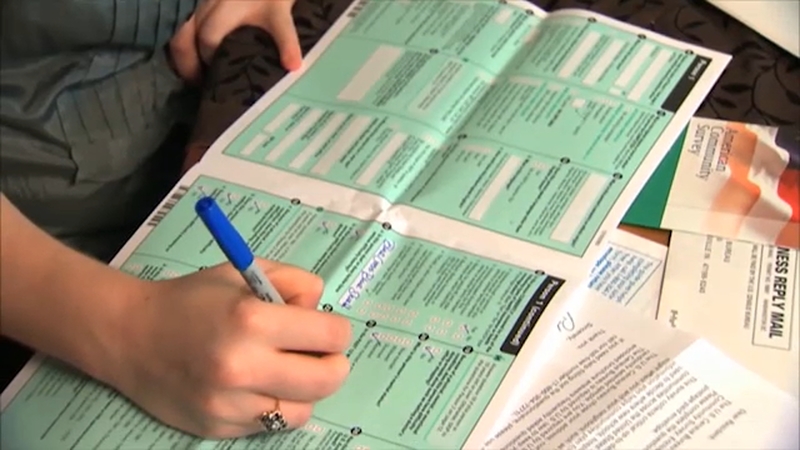 2020 Census will continue until October 31 after successful legal challenge

The U.S. Census Bureau updated its website to indicate that the census will be extended.

ABC7 is partnering with vote.org as part of the "I am a voter" campaign.

"The Trump Administration picked a fight with democracy and democracy won. We now expect the Census Bureau to fully comply with Judge Koh's order and not only inform every census employee that the census will continue until October 31, as it should have all along, but also ensure that this is the end to all legal shenanigans and the count actually continues until the end of the month. This is a victory for all of us and for the rule of law to ensure that everyone is counted. In NYC, we will continue our fight to ensure New Yorkers get every ounce of the money, power, and respect to which we are entitled."

A federal judge ordered the Census Bureau to text every 2020 census worker by Friday, letting them know the head count of every U.S. resident is continuing through the end of the month and not ending next week, as the agency previously had announced in violation of her court order.

Just a few days earlier the U.S. secretary of Commerce said the 2020 census would end October 5, despite a federal judge's ruling last week that the head count of every U.S. resident should continue through the end of October.

The new order issued late Thursday by U.S. District Lucy Koh in San Jose, California, instructed the Census Bureau to send out a mass text saying an Oct. 5 target data for finishing the nation's head count is not in effect and that people can still answer the questionnaire and census takers can still knock on doors through Oct. 31.

The judge also ordered Census Bureau director Steven Dillingham to file a declaration with the court by the start of next week confirming his agency was following a preliminary injunction she had issued last week.

Besides deciding how many congressional seats and Electoral College votes each state gets, the census also determines how $1.5 trillion in federal spending is distributed annually. Among other things, that spending includes highway funding and money for health care and education.

The U.S. secretary of Commerce says the 2020 census will end Oct. 5, despite a federal judge's ruling last week that the head count of every U.S. resident should continue through the end of October.

Judge Koh wrote in Thursday's decision that the Census Bureau and Commerce Department, which oversees the agency, had violated her injunction "in several ways." She threatened them with sanctions or contempt proceedings if they violated the injunction again.

"Defendants' dissemination of erroneous information; lurching from one hasty, unexplained plan to the next; and unlawful sacrifices of completeness and accuracy of the 2020 Census are upending the status quo, violating the Injunction Order, and undermining the credibility of the Census Bureau and the 2020 Census," the judge wrote. "This must stop."

Koh's injunction last week suspended a Sept. 30 deadline for ending the head count and also a Dec. 31 deadline for turning in numbers used to determine how many congressional seats each state gets in a process known as apportionment. By doing this, the deadlines reverted back to a previous Census Bureau plan that had field operations ending Oct. 31 and the reporting of apportionment figures at the end of April.

By issuing the injunction, the judge sided with civil rights groups and local governments that had sued the U.S. Census Bureau and the U.S. Department of Commerce. Those groups had argued that minorities and others in hard-to-count communities would be missed if the counting ended in September.

Koh referred to a tweet by the Commerce Department and Census Bureau last Monday that they now were targeting Oct. 5 as the date to end the census as "a hasty and unexplained change to the Bureau's operations that was created in 4 days."

In court papers, attorneys for the federal government argued that the Commerce Department and the Census Bureau had been complying with the judge's injunction.

The Census Bureau said it sent out the mandated message Friday afternoon. "As a result of court orders, the October 5, 2020 target date is not operative, and data collection operations will continue through October 31, 2020," the message read. "Employees should continue to work diligently and enumerate as many people as possible. Contact your supervisor with any questions."

Despite Thursday's order, there was still confusion on the ground about when the census would end. Pam Coleman, who is chair of a statewide committee responsible for census outreach efforts in New Mexico, said census staff in her area had not received directions on what they should do as of Friday afternoon.

"While there is justifiable cause for hope, it is not completely clear when the count will end," said Coleman, who chairs New Mexico's State Complete Count Commission.

Earlier this week, Koh had told attorneys for the civil rights groups and local governments that she would be open to a contempt motion against the Trump administration.