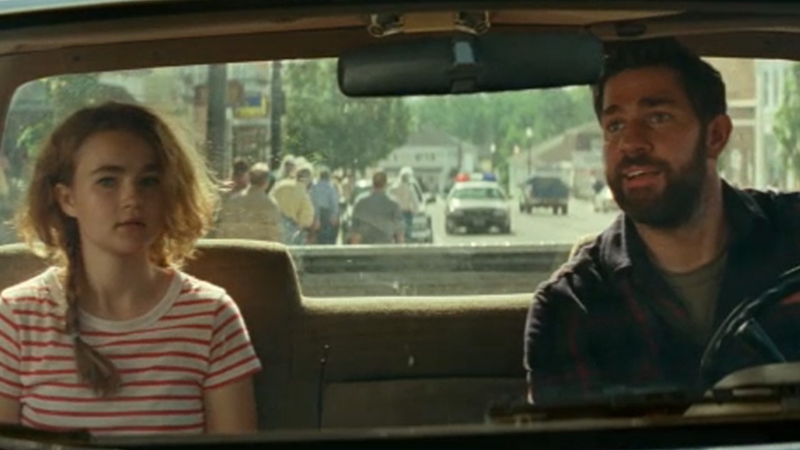 NEW YORK -- "A Quiet Place" is what is called a sleeper: an inexpensive film that made a fortune.

As a moviegoer himself, John Krasinski thinks sequels are rarely as good as the original, and he didn't want to be accused of what he calls "a cash grab."

The actor-turned-filmmaker questioned the need for a sequel and wondered how to advance the original story.

But I'm happy to report Krasinski has cracked the code.

Before "A Quiet Place II" can go forward, it first must go back to when the attack by the alien creatures began.

"We answer all those questions the audience was asking about Day 1, especially how did all this start?" Krasinski said.

The actor is seen just briefly in the earliest flashback scenes.

Before the action picks up - right after the first film ended, with his character dead - his wife and surviving family members are forced to leave their home and fend for themselves in a hostile world, where each step seems more treacherous than the last.

Monsters who hunt by hearing even the slightest noise are more aggressive than ever.

An acquaintance could help, but Emmett is, at best, a most reluctant savior.

Emily Blunt, who is the director's real-life wife, plays the mom. Her newborn is in a box that requires a constant flow of oxygen to keep the baby alive, amping up stakes that are already high.

But deaf actress Millie Simmonds is a revelation after she's given much more to do. She truly helps move the action forward.

Writer-director Krasinski prefers to call this a continuation rather than a sequel. As far as I am concerned, he has earned the right to call his movie anything he likes.

If you loved the first "A Quiet Place," you will find this one almost as scary.

It's also the rare follow-up that is almost - almost - as great as the first one, which was a masterpiece.
Report a correction or typo
Related topics:
arts & entertainmentmoviemovie reviewu.s. & worldsandy kenyon
Copyright © 2021 OnTheRedCarpet.com. All Rights Reserved.
TOP STORIES
The optimism on Omicron and why not to wait to get boosted
Biden to make at-home rapid tests free in new COVID plan
SCOTUS case on abortion law has major implications for North Carolina
NC Central law school gets $100,000 grant to help diversity efforts
LATEST: NC reports more than 3,000 new COVID-19 cases
1st case of omicron COVID variant identified in US
Show More
Thieves swipe at least $35k in designer bags from Cary boutique
Biden pledges to end HIV/AIDS epidemic by 2030
What we know about the Michigan school shooting victims
As Triangle home prices continue to rise, sales drop
Wake Health's COVID testing appointment requirement goes into effect
More TOP STORIES News