'It would mean everything': Raleigh athlete hopes to represent Israel in 2022 Olympics 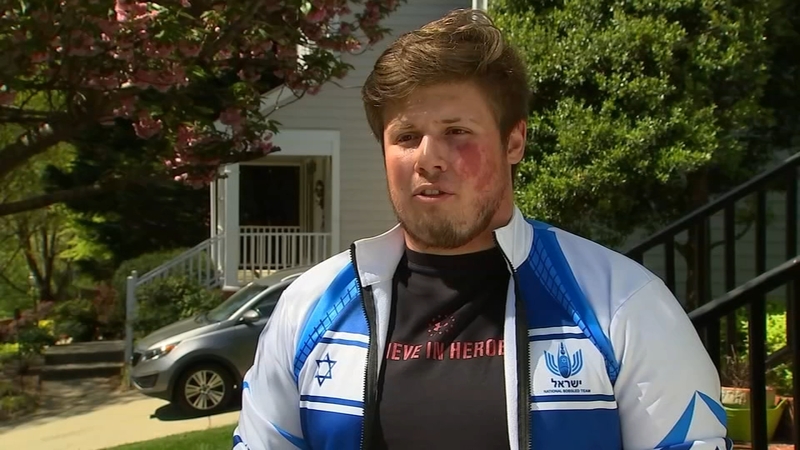 RALEIGH, N.C. (WTVD) -- In the midst of a global pandemic, the opportunity of a lifetime landed in the lap of a Raleigh athlete

"It was kind of a spur-of-the-moment thing," said Aaron Spiliopoulos. "I never really planned on doing it, but now I love it."

What started out as a Facebook ad to donate to the Israeli bobsled team that popped up on his dad's page turned into two months of training in South Korea for Spiliopoulos.

"We are very proud American Jews," said Aaron's dad, Theodore Spiliopoulos. "An opportunity came up and it's bobsled, very cool, very cool logo, donated money. Then a backer backed out and the team pilot contacted me to tell me that."

The team reached out to Theodore to ask if he wanted a refund since the team could no longer compete after one of its key members backed out. instead of a refund, he had a better idea.

"I said, look you've got to talk to my kid," he said. "I think my kid is the right fit for that if you're looking and AJ was like yeah, we're always looking and then Aaron picked up the mantle from there and ran with it." Theodore said.

"My athletic insides just kind of kicked in," Aaron said. "I had been looking for something for another outlet, another sport."

Aaron grew up playing all sorts of sports including football at Southeast High School. He planned to play at UNC Charlotte but when that didn't work out, bobsledding filled that athletic void. Once committed to the team, Aaron traveled to South Korea -- where he was immediately placed into quarantine in a government facility for 14 days. From there, he met up with the four other members of his team and started training.

"That was my first time in a sled, ever," Aaron said. "It was actually the first day I got out of quarantine; one of our teammates couldn't make practice, so my pilot was like, you know what, just get in the sled ... I ended up pushing 125 km that day. It was scary. It destroyed me the first time. It's hard to pick up; you're using a whole different set of muscles, but once you're doing it every day at 7 a.m. for about a month and a half you tend to pick up on it pretty quickly."

"When Aaron sets his mind to something, it gets done," she said.

Aaron said it's not only about continuing his journey as an athlete but about representing Israel. He said he's both ethnically and religiously Jewish, and he wants to show the world his pride in his heritage.

It's a determination and resiliency the Jewish people have shown throughout recorded time.

"On a historical level, 2022 represents 50 years since the Munich (1972 Summer Olympics) massacre, and then watching your kid is everything," Theodore said. "It's showing pride that we're strong people that may be different religiously and culturally, but we're still part of the American fabric."

The team is training in hopes of qualifying for the Winter 2022 Olympics in Beijing. If they do, it would be the first time ever that an Israeli bobsled team made it to the Olympics.

"It would mean everything," Aaron said. "I went to a foreign country on a social media post and two interactions with somebody to try something I've never done before, something that looks scary and impossible. It's hard work every day."

Next up for Aaron and the team is Olympic Trials in Park City Utah. Theodore said he is looking forward to being on the ride and that he's going to be the guy screaming the loudest when they go to compete.
Report a correction or typo
Related topics:
sportsraleigholympicsathletesisraeljewishgood sportsraleigh news
Copyright © 2022 WTVD-TV. All Rights Reserved.
TOP STORIES
A motorcycle's unforgettable ride back home
Trees downed, power outages reported after powerful overnight storm
Record-breaking heat today for Triangle
Driver struggles to get permanent tags for truck bought on Vroom
American Airlines flight veers off runway in Charlotte
Our America: Because I Am | Full episode
Officials remain optimistic as tourism in Wake County booms
Show More
NC State's Tommy White breaks ACC freshman home run record
Violent crime in Durham up 8% during first few months of 2022
Funerals begin for victims of Buffalo supermarket shooting
Decrease in home sales predicted nationwide but NC housing market hot
NY high court to determine if Bronx Zoo elephant is a person
More TOP STORIES News