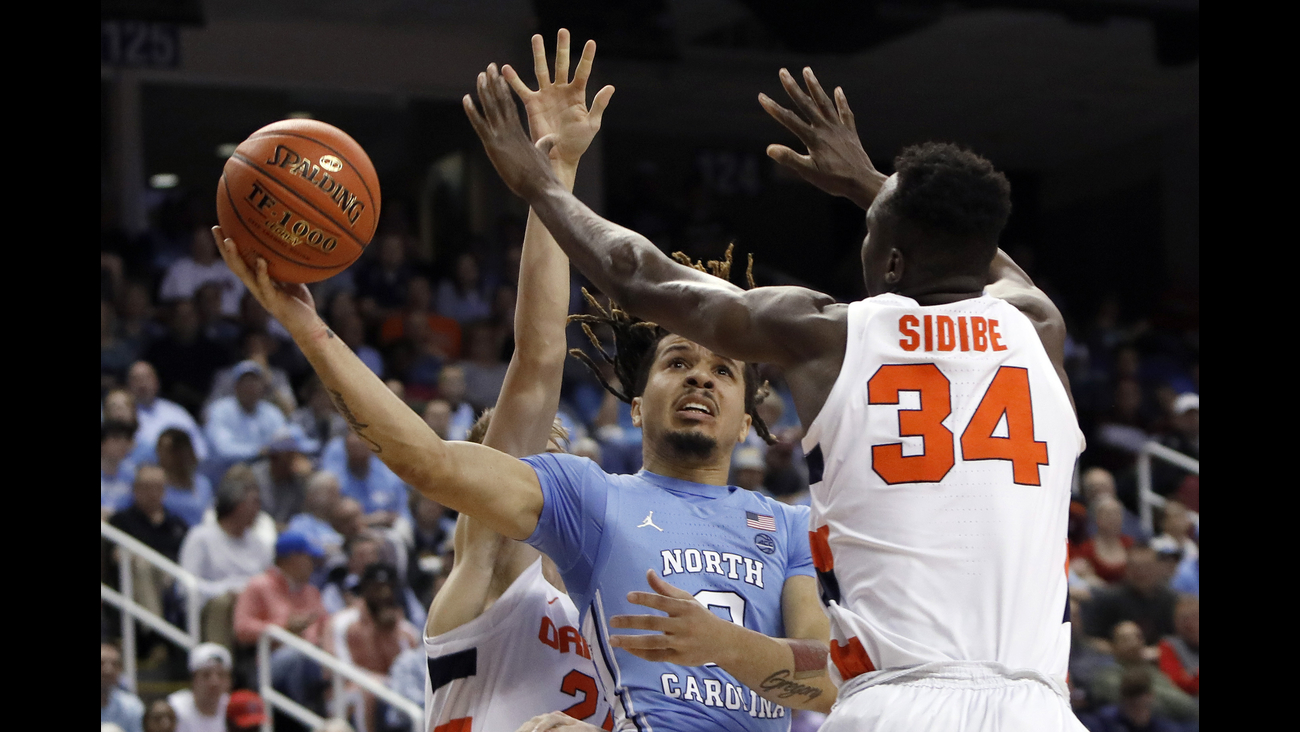 GREENSBORO, N.C. (WTVD) -- Elijah Hughes scored 27 points and Syracuse dominated the opening half to build a big lead on the way to beating North Carolina 81-53 in Wednesday's second round of the Atlantic Coast Conference Tournament.

Hughes had 18 points by the break, including a contested jumper in the final seconds to cap Syracuse's 15-0 run to close the half. That pushed Syracuse to a 43-22 lead, a margin that never dipped below 16 in the second half as the Orange (18-14) emphatically ended a nine-game losing streak to the Tar Heels (14-19).

Buddy Boeheim added 17 points for Syracuse, which jumped to a 7-0 lead in the first 72 seconds and never looked back. The Orange finished the game shooting 47% and scored 27 points off 18 turnovers by UNC.

Garrison Brooks scored 18 points for the 14th-seeded Tar Heels, who missed 23 of 31 shots - including all seven 3-point tries - in the opening half as Syracuse took over. Potential one-and-done point guard Cole Anthony, averaging 19.1 points, managed just five points on 2-for-10 shooting.

Even with a home-state crowd backing them, the Tar Heels got as close only as 57-41 in the second half on Leaky Black's three-point play at the 11:51 mark. Boeheim responded with an immediate 3-pointer, ending a feeble rally that turned out to be the Tar Heels' best of the night as Syracuse eventually pushed the margin to 30 late.

The Tar Heels finished the game shooting 33%, including 2 for 16 on 3-pointers.

The game was the last of four second-rounders Wednesday -- and the last with most fans in attendance.

The ACC has announced it will not allow the general public into tournament games starting Thursday amid concerns about the spread of the new coronavirus that has become a global pandemic.

That means the quarterfinals - featuring No. 4 Florida State, No. 10 Duke, No. 15 Louisville and No. 17 Virginia - will take place with only essential tournament personnel, teams, player guests, limited school administrators and credentialed media present.

N.C. State is onto the quarterfinals of the ACC Tournament with a 73-58 win over Pittsburgh on Wednesday afternoon.

The victory improves the Wolfpack's chances of making the NCAA tournament and sets up a third meeting with Duke on Thursday afternoon in Greensboro. The teams split their regular-season meetings.

Devon Daniels had 23 points to lead the way for N.C. State (20-12), which steadily pulled away after a close first half.

Early Pitt turnovers led to some easy points for State, which got 18 points in the first half off nine Panther miscues.

Daniels splashed in a three off one of the Pittsburgh gifts giving State a 10-point lead at 31-21.

At that point, Pitt coach Jeff Capel went to a zone defense. Much like the Duke game in Durham, N.C. State struggled to adjust to facing a zone defense and the offense went stagnant, helping the Panthers climb back into the game.

Markell Johnson finished with 11 assists for the Wolfpack.

Al-Amir Dawes scored 18 points, and eighth-seeded Clemson defeated ninth-seeded Miami 69-64 on Wednesday to advance to the quarterfinals of the Atlantic Coast Conference Tournament. 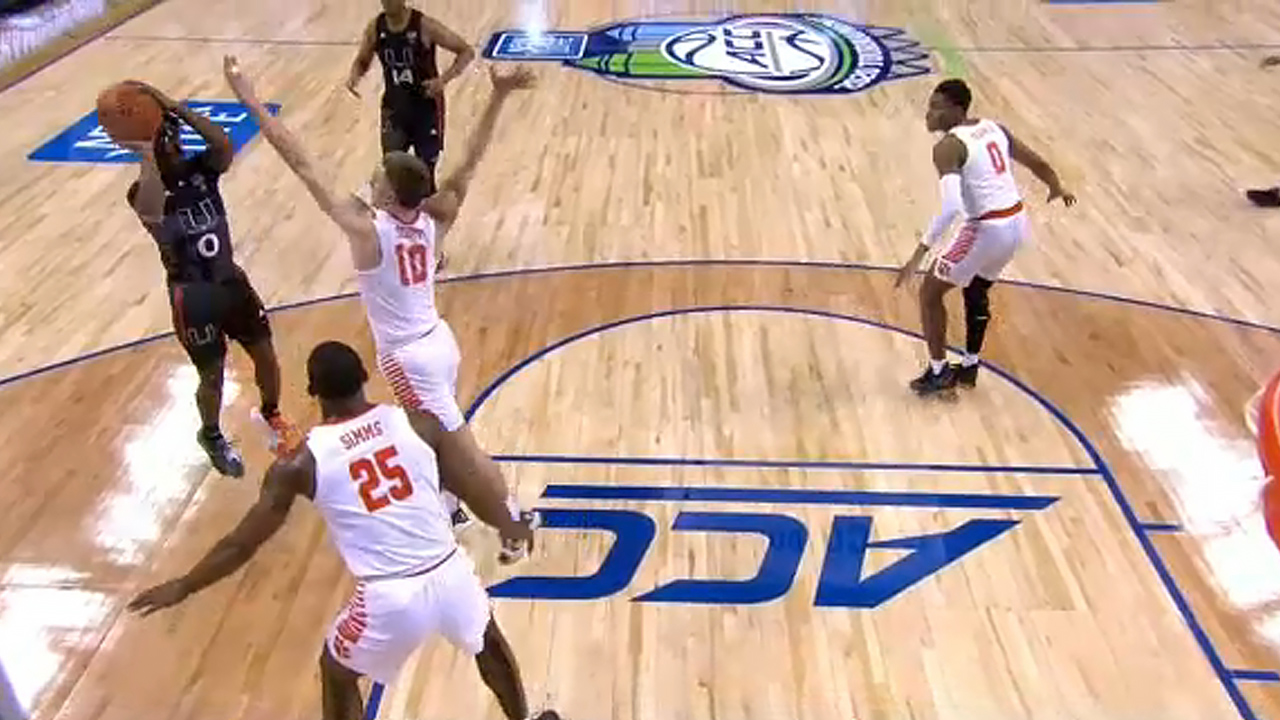 Clemson's late surge propelled the Tigers past Miami on Wednesday at the ACC Tournament in Greensboro.

Aamir Simms added 14 points and 10 rebounds and John Newman had 11 points for Clemson, which finished 18 of 19 from the free-throw line.

In what amounted to a 3-point shooting contest for most of the game, the two teams combined for 58 attempts, making just 18.

Both teams entered with 15-15 records, looking to keep their postseason berths alive.

Miami defeated Clemson 73-68 in overtime on the road on New Year's Eve and this game was every bit as tight with neither team leading by more than seven points until Clemson took over late.

The Tigers outscored Miami 16-11 in the final four minutes.

With the game tied at 53, Curran Scott made two free throws and Dawes added four more to put the Tigers ahead by six. Hunter Tyson then drilled a 3-pointer from the top of the key and Dawes added two more free throws to cap an 11-0 run and give Clemson its biggest lead of the game at 64-53 with 1:04 remaining.

Things got a little scary at the end for Clemson after Isaiah Wong stole an inbounds pass and converted a baseline 3 to cut the lead to 68-64. Miami's Anthony Walker added another steal and was fouled, but missed both free throws with 10 seconds left.

Clemson moves on to face No. 1 seed Florida State on Thursday in the quarterfinals.

A public shuttle bus service to and from the Coliseum Complex will be available beginning Wednesday. The shuttle will operate from Entry F of the Sheraton Greensboro at Four Seasons (3121 Gate City Blvd.) to the ACC Hall of Champions at the Coliseum Complex.
Shuttle service is $5 per person for round-trip service. Shuttles will run continuously during the following times: