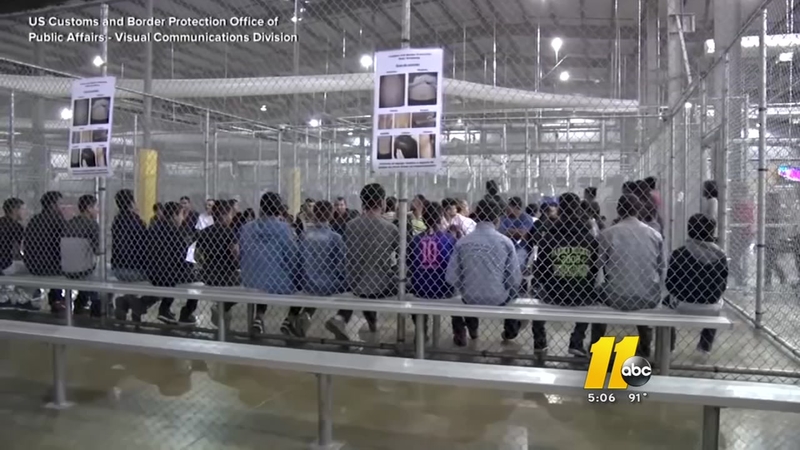 RALEIGH, NC (WTVD) -- On Wednesday, President Donald Trump signed an Executive Order ending the policy of separating families at the border following outcries and increased political pressure from both sides of the aisle.

"Anybody who's a Republican in a difficult election wants this policy to end. It's dramatically unpopular. Only 27 percent of the public approves, and that is really low. A bare majority of Republicans approves of this policy, and again among those who disapprove, I think there's a lot of passion against this," explained Dr. Steven Greene, a Political Science professor at N.C. State.

Rallies have taken place across the country against the practice, including here in Raleigh.

Faith leaders from across the Triangle gathered at the Open Table United Methodist Church calling for lawmakers to take action.

On Tuesday, Governor Roy Cooper announced he was recalling three North Carolina National Guard Members from the border in light of the separation policy.

"It is purely a political move. It's pure symbolism. Three National Guard Troops aren't going to make a difference. But I think it's important symbolism," explained Dr. Greene.

Facing a Republican-controlled State House and State Senate, this represented an opportunity for Governor Cooper to bypass state lawmakers and take action.

The decision drew a rebuke from former Governor Pat McCrory, who said Governor Cooper was using the troops as "political pawns."

As pressure mounted on lawmakers to take action, the long-term political impact is not known.

On Wednesday, a group of Republican senators including Thom Tillis proposed the Keep Families Together and Enforce the Law Act.