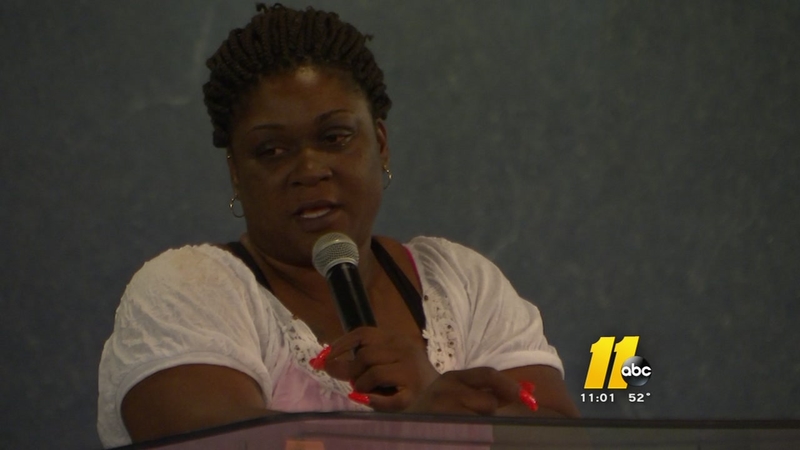 RALEIGH (WTVD) -- An emotional Raleigh mother explained just how angry she is after a Raleigh police officer was exonerated in her son's death.

"(Freeman) had two books this high on her desk, on her conference table, to show us the evidence," Byrd said as she detailed the private meeting she and her family had with the D.A. on Wednesday morning.

"Because I was so upset, I said just tell me what you're going to do with the officer and I'll leave," Byrd said. "And that's what she did, she told me and I got up."

Byrd says she walked out, too angry to stay and hear Freeman's reasoning.

The final report detailed a foot chase, a struggle, and the conclusion that Denkins was reaching for a gun in his waistband. And that officer D.C. Twiddy's use of deadly force was lawful.

"Officer Twiddy did not commit a crime in shooting Mr. Denkins. He did act in self-defense," Freeman told ABC11 in the minutes after announcing the findings.

"(Freeman) made her decision according to the evidence, physical evidence, and the officer's statement," Byrd said. "My son wasn't there to make a statement."

Watching and weeping at the prayer vigil was Vergie Townsend, another southeast Raleigh mom who happened to hear the gunshots that day in February. Ever since, she has been trying to turn the experience into a lesson for her own son, 17-year old Jason.

"For the longest, I've been feeling like my child could be next. Because he has been getting into a lot of trouble with the law," Townsend said.

Townsend acknowledged she's become a lot stricter in her parenting since the shooting, anxious about letting her son out of her sight.

"(My mom tells me) I don't need to be out here hanging with the wrong types of friends, come in the house at a certain time," Jason said.

In the meantime, Denkins' mother wants Raleigh police to take a lesson from all this as well.

She openly asked, several times Wednesday night, why didn't the officer use his Taser to subdue her son, instead of a gun.

She is pledging to keep up that fight.