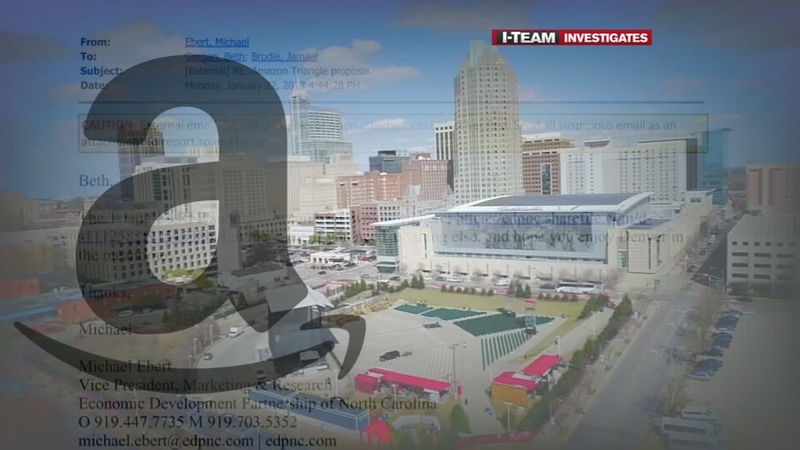 The ABC11 I-Team on Friday obtained a trove of new documents relating to the Triangle's bid for Amazon's new headquarters, called "HQ2," revealing several new details about the pitch for the project - and what might have deterred the tech giant from calling Raleigh home.

Among the revelations in the 1,000 page trove were specific site locations for the proposed space, which Amazon anticipated the construction of 8 million square feet of office space: Research Triangle Park in Durham, Downtown Raleigh, Chatham Park in Pittsboro, a site inside Research Triangle Park known as Parmer RTP, an area in East Cary, Wendell Falls and the Veridea area in Apex.

The I-Team received the information as part of an open-records request submitted earlier this year. A number of stakeholders, including the North Carolina Department of Commerce and the Greater Raleigh Chamber of Commerce, previously told ABC11 they were prohibited from sharing such details because of Non-Disclosure-Agreements with Amazon (the documents even show communications barring stakeholders from speaking with local media).

I-Team in Seattle: What would Amazon HQ2 look like in the Triangle?

In addition to pitching multiple sites, the documents show North Carolina offered several other incentives that could have topped $2 billion under the state's Job Development Investment Grant program.

The bid also had a code name of "Project Smith."

Earlier this month Amazon announced it will invest $5 billion and create more than 50,000 new jobs between new locations in New York and Virginia. The announcement came after a year-long national competition that included more than 100 cities.

In a letter to Amazon CEO Jeff Bezos, Gov. Roy Cooper writes: "For years, North Carolina has been known as the State of Minds, and that's why we offer the ideal location for HQ2."

Though experts rarely considered Raleigh a "favorite" in the HQ2 sweepstakes, memos from Economic Development Partnership of North Carolina show Amazon managers said North Carolina "had a good shot" at the project.

Still, communications showed reservations about the lingering legacy of House Bill 2, the controversial 2015 law sometimes referred to as the "Bathroom Bill." In the same memo saying the Tar Heel State had a strong application, a government official says HB2 is "still causing heartburn" with Amazon's leadership.

The official presentation to Amazon, moreover, featured a full page titled "A Statement on HB2" written by Greg Winkler, the former Board Chair of the Greater Raleigh Chamber of Commerce.

"We are fortunate to have the opportunity to be an influential and thoughtful voice throughout this process," Whitaker asserts, noting the chamber-led All Are Welcomed Here Campaign. "These efforts were realized during the 2017 session of the North Carolina General Assembly when HB2 was repealed - gathering votes from assembly members of both parties and signed by Governor Roy Cooper."

"I want to tell you that North Carolina is a welcoming state," Cooper writes in a letter to Amazon CEO Jeff Bezos. "Like every family with an embarrassing uncle or two, we have a few politicians who want it to be 2017 instead (of) 2017. But here in North Carolina, you'll find authentic people who respect others, love our families, people who work hard and are loyal to the state in which we live."
Report a correction or typo
Related topics:
technologyraleighapexcaryamazonbusinessi team
Copyright © 2022 WTVD-TV. All Rights Reserved.
I-TEAM
Fayetteville PD on track to full staffing; what about Durham, Raleigh?
Wake County reports highest rate of COVID-19 cases per capita in NC
Shortage of mental health professionals persists as need grows
Durham County Sheriff reveals cross-county 'Strike Team'
TOP STORIES
Man charged in Hope Mills double murder
Smith, Raanta, Hurricanes top Rangers for 2-0 series lead
1 person in hospital after shooting overnight in Raleigh
Parents share mixed reactions over plans for boosters for children
Wake Schools bus driver charged with driving bus while impaired
Fayetteville PD on track to full staffing; what about Durham, Raleigh?
Mail delays blamed on dog, owner claims case of mistaken identity
Show More
Body found on the bank of the Tar River in Edgecombe County
'Thrilled to death': Princeton man wins Cash 5 jackpot
Canes fans pile into PNC for Game 2 despite COVID resurgence
Raleigh resident from Buffalo, NY weary one week after massacre
Judge: COVID-19 asylum restrictions must continue on US-Mexico border
More TOP STORIES News