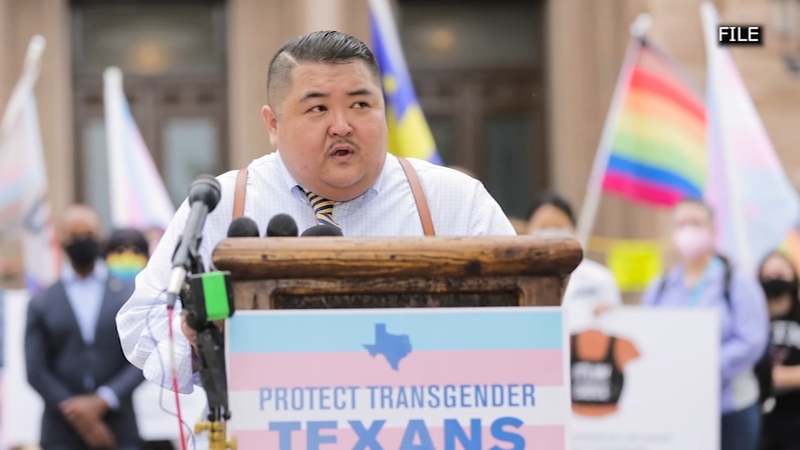 HOUSTON, Texas -- On Tuesday morning, the American Civil Liberties Union (ACLU) announced the organization is suing to block the Texas Department of Family and Protective Services from implementing "lawless and dangerous new directives" from Gov. Greg Abbott to investigate parents who work with doctors to provide their kids with medically necessary, gender-affirming care.

This directive is a transparently political attack that is beyond the Governor’s legal authority.

But we understand why families are terrified. At least one family has already had an investigator show up at their door.

We’re asking a court to stop this NOW.

ACLU is a nonprofit organization whose goal is "to defend and preserve the individual rights and liberties guaranteed to every person in this country by the Constitution and laws of the United States."

Senate Bill 1646 is among other bills that advocacy groups say threaten the rights of transgender Texans. The bill defines abuse under Texas Family Code to include administering or consenting to a child's use of puberty suppression treatment, hormones, or surgery for gender transitioning.

Texas Sen. Charles Perry insisted in a floor debate that the bill is necessary to "prevent children from making irreversible decisions that they may regret later, but experts say both parts of that claim are questionable."

ABC13's partners at the Texas Tribune reported a recent study, which showed that more than 40% of transgender youth attempt suicide. According to recent studies by the U.S. Centers for Disease Control and Prevention, the rate of suicide attempts among transgender youth is three times higher than among their cisgender counterparts.

And the moves now leave Texas families with transgender children choosing between getting their children health care that medical experts recommend or possibly facing a child protective services investigation.

"Abbott and Attorney General Ken Paxton told trans youth in Texas last week that they considered their health care to be a form of child abuse. This is dangerous, dehumanizing, and terrifying to trans youth and their supportive families. The declaration will have devastating consequences - and we are already seeing them.

Abbott and Paxton, along with the Texas Department of Family and Protective Services, want to investigate families simply for following best practice medicine and supporting their trans kids through lifesaving, medically necessary health care. Texas political leaders lack the legal authority to enforce this declaration and separate trans youth from their families. But that hasn't stopped investigations from starting."

A number of parents of trans youth tell me they’re concerned following Gov. Abbott’s new directive to Texas DFPS on Tuesday about gender-affirming date. Coming up tonight on @abc13houston at 6 p.m., hear from an attorney with @ACLUTx about the legalities surrounding the order. pic.twitter.com/DkJLi2XBa0

In a previous ABC13 report, activists speak out on violence against the transgender community in Houston after a transgender woman was found murdered in her apartment.

"Transgender women, especially Black women, are more likely to experience homelessness and be more likely to be discriminated against by the homeless system. Texas is one of the deadliest places in America for trans women, and that's important to look at," said Courtney Sellers, the executive director of Montrose Grace Place. A nonprofit organization for the homeless youth of all sexual orientations and gender identities.

A Houston mother, who requested anonymity and will be referred to as Jane Doe, said that her family joined their 8-year-old transgender daughter in 2021 in advocating for trans rights at the Texas State Capitol.

"My daughter didn't know the world was scared of her until this year because we've sort of kept her in this very safe bubble of family and friends who are supportive," said Doe. "She asked, 'Why do so many people hate me?' That's the first time she's ever expressed any kind of discomfort with who she is."

Doe said she was one of the parents who reached out to legal experts for reassurance after seeing Abbott's directive. She chose not to tell her daughter about it, fearing it could add to her child's anxiety.
"Supporting and loving your child is the antithesis of child abuse. My other fear is that this is going to fire up the crazies, and they're going to try to find out where she goes to school, where we live, threaten us, and try to hurt her," Doe told ABC13 in a previous report.

"No one should have to fight this hard for lifesaving care. Rather than making medical care more affordable and accessible to people who need it, Texas is adding yet another barrier, one that will land hardest on Black and Indigenous families," ACLU told the ABC network.

Greg Abbot has officially directed Family and Protective Services to begin investigating all trans children in Texas and prosecuting their parents as child abusers.

He has also instructed all teachers, doctors, and caregivers to begin reporting any trans students they see. pic.twitter.com/AO4FdYNuym

Requests for comment from Abbott's office have not been returned.

The Texas Tribune contributed to this story.

For LGBTQ mental health support, call The Trevor Project's 24/7 toll-free support line at 866-488-7386. You can also reach a trained crisis counselor through the National Suicide Prevention Lifeline by calling 800-273-8255 or texting 741741