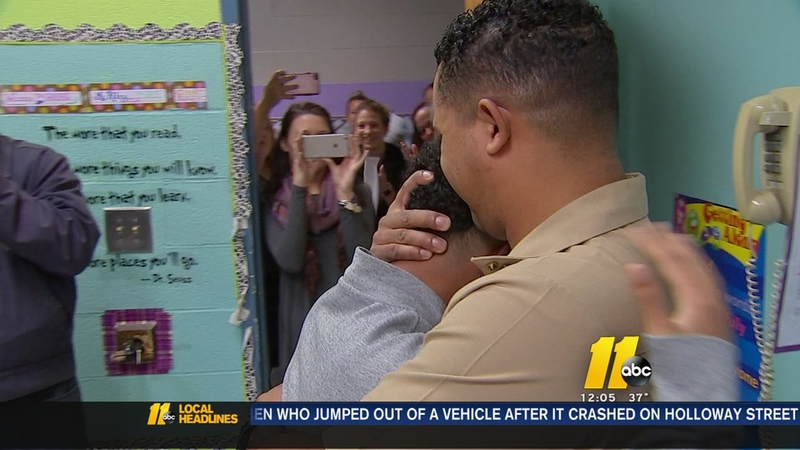 Twelve-year-old Amiahs Gomes got a Christmas surprise when his brother, Alexander, who is serving in the Navy, surprised him at East Wake Middle School in Knightdale Wednesday.

The sailor, now stationed in California, is preparing to serve his second deployment in North Korea next month. The brothers hadn't seen each other in about a year.

"He told me that he wasn't going to come," Amiahs Gomes said. "I thought he wasn't and then it was a surprise."

"I had butterflies with my mom in the doorway," said AO 3rd Class Alexander Gomes about the moment before he surprised his brother. "All the troubles I had of everything - North Korea coming up and everything just went away."

Their mom, Wanda Dossantos, helped orchestrate the surprise for Amiahs.

"He's just a wonderful kid," Dossantos said. "So I wanted to make Christmas special. I didn't just want to make it about gifts."

"It definitely touched my heart because my dad was in the Navy and the Air Force and I lost my dad kind of recently and I thought family is the most important thing during the holiday time and if we can make this special surprise happen here at school, we definitely want to be a part of it," Beaulieu said.

Dossantos said she wanted to do something special for Amiahs after his rough year.

The middle schooler moved to North Carolina from Boston after his parents' divorce. He didn't know anybody at school.

But Amiahs has thrived, playing in the band and on the football team.

And his brother has been there for him, no matter how far away he is.

"He means a lot to me," Amiahs said, wiping away tears. "He's helped me through a lot. He's a good role model for me."

Their 18-year-old other brother, Alick, enlisted in the Navy recently. Amiahs wants to follow in his brothers' footsteps, by becoming a Marine.

"What he's doing is inspiring me to help the country also," he said of Alexander.

For now though, he'll enjoy Christmas with his family.

They say they'll eat their mother's home-cooking and play lots of Xbox over the Christmas break.

ABC11 was the only news camera here for the special reunion. Here is the live footage: