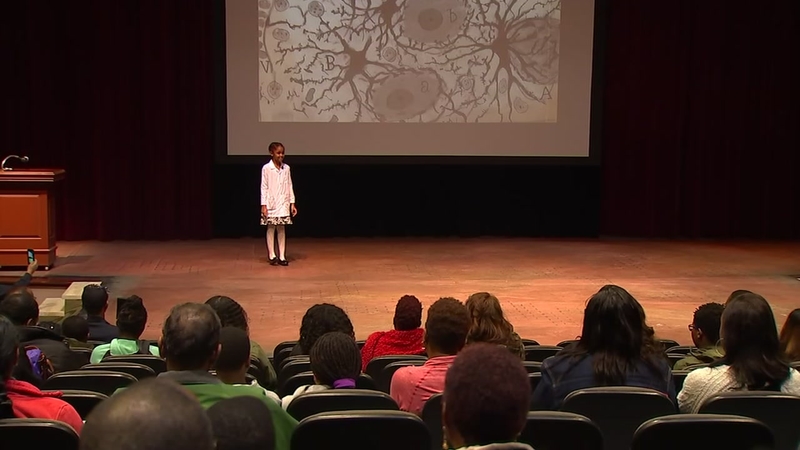 CARY, N.C. (WTVD) -- ABC11 has reported several stories about the movement encouraging young people to consider careers in tech or the sciences, so word of a Youth Innovation Summit on Saturday brought Eyewitness News to Cary.

Joseph Lynn of the Triangle Uplift Foundation told ABC11 about the day's focus: "To help our students get more interested in the STEAM and the STEM programs. And it's designed to be a fun, educational experience."

The keynote speaker, an eight-year-old neuroscientist from Atlanta, is already a veteran presenter at forums like the one in Cary.

"Outside, I'm a normal kid," said Amoy Antunet. "I play Minecraft, I do all those things."

She's also prepared to discuss cell division, the heart, the brain, and neuropsychology after getting hooked on science at the age of 3. That's when her parents say she came across a microscope owned by her father.

Five years later, she's appeared on CNN, the BBC and other worldwide media outlets as well as conferences where she's spoken on Alzheimer's. She also has more than 16.800 Facebook followers and posts on social media as #princessnerd amd #yourstemgirl.

"If you scratch out the science stuff, I'm actually pretty normal," she insists while advising students at Saturday's summit: "They should act on their potential, and if there's something that you really like you should act on it."

Tenth grader Max Neuwirth, attending his second Youth Innovation Summit, said this when asked about his interests and aspirations: "I wouldn't say sciences. I'm more into cars and mechanical engineering, so if there's a workshop related to cars, we'll see!"