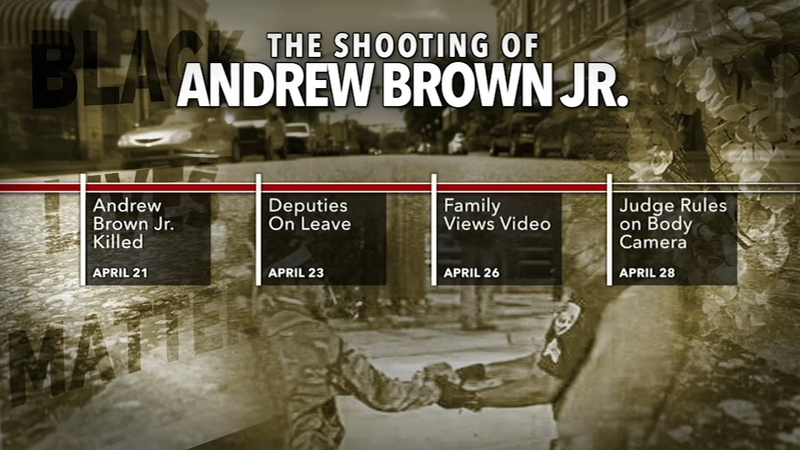 ELIZABETH CITY, N.C. (WTVD) -- As Andrew Brown Jr. was laid to rest Monday afternoon in Elizabeth City, ABC11 dedicated a special half hour to the fallout in Pasquotank County from the calls for reform to the mental health impact many African Americans are feeling after another Black man is shot and killed by police.

One of the more poignant moments at Brown's funeral came when Rev. Al Sharpton brought on stage the relatives of other Black men killed by law enforcement across America: Eric Garner's mother, Daunte Wright's sister and the siblings of George Floyd. His sister Bridgett, who lives in Fayetteville, expressed her shared grief.

"I said I wasn't going to attend another funeral after my brother," Floyd said. "I feel the pain that this family is feeling."

In a live conversation, Dr. Ashly Gaskin Wasson, a therapist who specializing in racialize trauma at PACT Durham, defined racial trauma as a set of experiences people can have to racism or incidents they experience as racism. She says it can manifest as a shift in thinking patterns; a feeling they can't be safe; feeling anxious, powerless or angry; even changes in heartrate when interacting with police.

Dr. Ashley Gaskin-Wasson shares ways racial trauma can manifest and how the killing of Andrew Brown Jr. may be affecting Elizabeth City residents.

"The reason this is so important is because in the long term, when you think about someone's life course, having experiences or reactions like this repeatedly, whether it's in response to police shootings, workforce racism or school, anywhere -- it starts to wear on the body," Gaskin Wasson said. "And it's one of the main vehicles through which we believe Black people die sooner than white people."

Those recommendations have run into resistance at the General Assembly. Davis asked Pittman about the delay.


"So you have those in positions of power, legislators who want to block or hinder progression when it comes to holding these individuals accountable -- just because they are loyal to a particular association," Pittman said.

Davis reached out to Republican leaders on the Justice and Public Safety Committees for more answers on when some of this legislation might get some traction on Jones Street. She has not heard back.