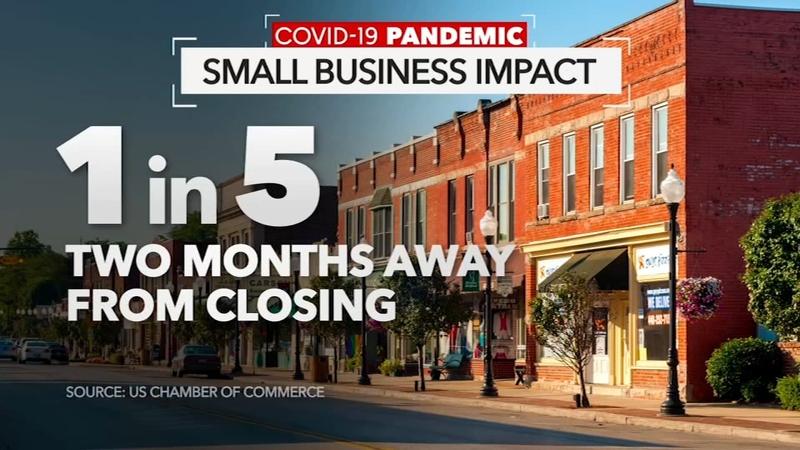 Poll: 1 in 5 small businesses expected to cave in due to crisis

RALEIGH (WTVD) -- A new mural popping up in Downtown Raleigh. Restaurateur Ashley Christensen putting up an image of Oak Tree, to represent the City of Raleigh, and underneath nearly every restaurant is listed. There's a hashtag #TooSmallToFail.

The artwork comes as Christensen permanently closed Chuck's Burgers recently and other small business owners are starting to cave during the COVID-19 crisis.

Linus and Pepper's on South Salisbury Street is shuttering its doors and Virgil's Original Taqueria next-door is doing the same.

"With heavy hearts, but clear minds we made the decision," said owner Jon Seel on a social media post. "This pandemic has dealt a crushing blow to our industry."

An industry survey from the James Beard Foundation finds 4 out 5 restaurant owners didn't know if they would reopen. The majority, 90 percent, believe they'll need up to four weeks to get everything ready to reopen.

"All our produce, all of our protein, all of our diary... that's in the garbage now and we still owe for it. We have to repurchase all that stuff again," said Durham restaurateur Gray Brooks.

He owns Littler and Jack Tar, The Colonel's Daughter, and Pizzeria Toro, which is doing curbside pick-up right now, in the Bull City

Brooks fears other places will continue to fold in the weeks ahead.

He compares the situation to a powerful hurricane.

"It's almost like you evacuate a coastal town for a hurricane, and you don't really know how bad it is until everyone's allowed back in so we're still waiting for that moment," said Brooks.

He is calling for legislative help.

"A lot of restaurants, it'll cost $50,000 or $60,000 just to get back open. That's paying for a full payroll cycle getting staff to come back in, clean up, get everything prepped, everything ready to open," said Brooks. "That's not even counting paying for the food that we already purchased and were not able to sell."

The takeaway -- restaurants are trying to make it through, but some can't handle the losses they already incurred let alone what it'll take to reopen.

You can offer support to a favorite restaurant by ordering food curbside.