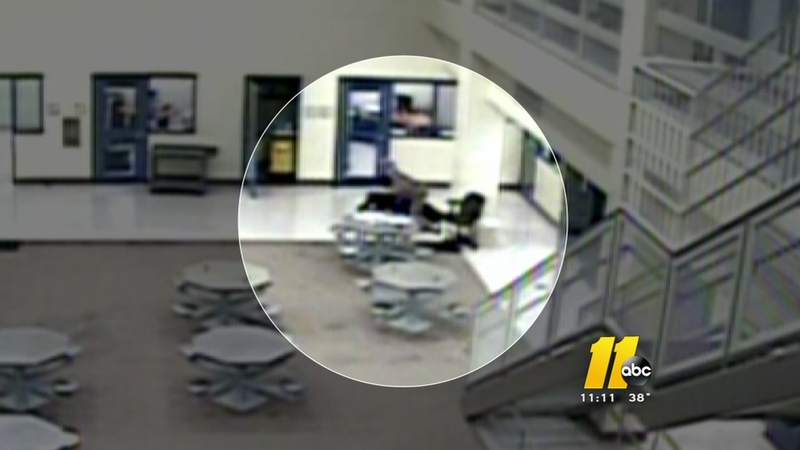 RALEIGH (WTVD) -- Anyone who takes a job at a prison knows it's dangerous, but some say there isn't enough being done to keep female employees safe. There are many women who work in the NC prison system and are attacked by the male inmates while on the job. Two of these female workers talked to me about their experiences.

Rosie Andersen knows first-hand the dangers of her job.

"This was not a normal use of force. This was almost a murder. I almost didn't come home to my kids," Rosie said.

In August of 2015, Rosie was working at Raleigh's Central Prison. She was on duty monitoring a prison block and finishing up her paperwork. Out of the blue an inmate, Sam Whittington, attacked her.

"He started just beating the hell out of me," Rosie added.

In 2015, worker Rosie Andersen was attacked by an inmate

In the video Rosie shared with me, you can see Whittington sitting on top of her and hitting her several times.

"He lunged at me and we went down to the ground. He took me down with a blow to the head. I was dazed so when I fell, I hit my head on the floor again. I broke my hand in two places. I took 7 to 10 more blows to the head. He choked me till I was unconscious," Rosie described.

Whittington also tried to sexually assault her, but she finally was able to regain consciousness and fight him off. She was also able to pepper spray Whittington until help arrived.

Laura Harmon, a counselor at Raleigh's Central Prison, was also attacked on the job. She was with an inmate in her office when two other inmates barged into her office.

"Completely went out of his restraints, and bust in the door," she added. "The inmate that was in my office ran behind me, and they jumped over me to get at him and took me over my desk."

She says punches were flying and she was stuck in the middle.

"I hit the back of my head on the window ledge, and I was knocked out. I don't remember anything that happened," She added.

Laura ended up with severe head and shoulder injuries that still impact her today.

Both women say they're still being victimized for the workers compensation process. They say they've been left waiting as it takes months for their doctor appointments to get scheduled and they also say they have many unpaid medical bills.

"The bills are piling up that's supposed to be covered by them. They're not picking it up," Laura said.

Laura and Rosie also say worker's compensation have pressured them to get back to work.

While both women initially went back to work at Raleigh's Central Prison, they are both off the job again due to their injuries from the attack. Rosie and Laura are seeking legal action against the state.

As for state prison officials, they would not do an interview with me on the issues raised by Rosie and Laura. Instead they provided this statement:

"When employees are injured on the job, their treatment and recovery is managed through the workers compensation process. No injured employee returns to work until cleared by a doctor and any necessary work restrictions are established by that doctor. The NCDPS Crisis Intervention Team is routinely engaged to assist employees who suffer trauma or assaults on the job. The resources of the Correctional Peace Officers Foundation are often used to further assist employees.

Central Prison is a close-custody prison facility that houses several specialized inmate populations including mentally ill inmates, safe keepers, death row inmates, and inmates who have exhibited violent or disruptive behavior and require restrictive housing. Within these populations are some of the most dangerous, violent and unpredictable inmates in the state prison system. It can be a very challenging work environment, but our policies and procedures are designed to minimize the risks and keep employees and inmates as safe as possible."

They would not provide me with the numbers of how many assaults there has been on staff at Raleigh's Central Prison, instead they would only share system-wide data regarding assaults on staff members.