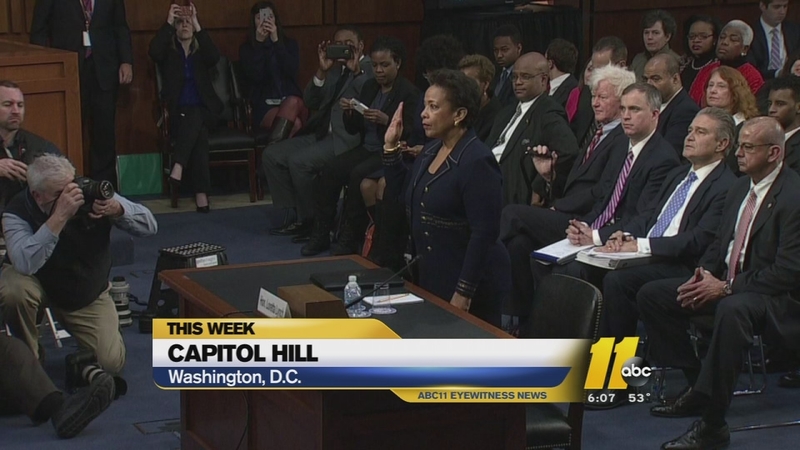 DURHAM (WTVD) -- Loretta Lynch, the attorney general nominee who grew up in Durham, is now one step closer to getting the job following a hearing earlier this week. The federal prosecutor appeared before senators on Capitol Hill on Wednesday. Her family was there and sat down with us to share how they felt she held up under the intense scrutiny, and why they feel she's still the best person for the job.

"I'm proud of all that she has done, and all that she is still doing, and I tell her that if I wore anything now with buttons on it they would pop off," said her mother, Lorine Lynch, with a laugh.

With Lynch poised to become the first African American, female attorney general (if confirmed), it's no wonder her parents are bursting with pride. And that feeling was magnified as they witnessed her stand up to the pressures of being grilled by the Senate Judiciary Committee this past week.

Those responses included taking a stance on the recent tensions between police and the communities they serve.

"If confirmed as attorney general, one of my key priorities would be to work to strengthen the vital relationships between our courageous law enforcement personnel and all the communities we serve," Loretta Lynch said on Wednesday to the committee.

She also defended the legality of the president's immigration policy. However, when questioned as to whether she would simply be an extension of the president's policies she pledged independence from Obama and promised to work with the Republican-led Congress.

"I will be myself. I'm going to be Loretta Lynch," she explained.

Meanwhile, her parents who still live in Durham believe, if confirmed, she will do just that.

"She's always been independent, even from high school," says her father.

And from her time as a pastor's daughter growing up in the South, to her career as the top federal prosecutor for parts of New York City and Long Island, her father believes her life experiences and dedication to upholding justice have prepared her to take on this next chapter of her life.

Following the hearing this week, Lynch did pick up two key Republican endorsements. This could signal her approval by the Judiciary Committee, since she'd only need two Republican votes if all the Democrats back her. From there, her nomination would move on to the Senate where it's likely she'd also win approval.