Basketball player, who is also a firefighter, helps save life of referee during game

"It was kind of instinctual. It surprised me how quick I was able to switch into that mode," Myles Copeland said
ESPN
By Jamal Collier 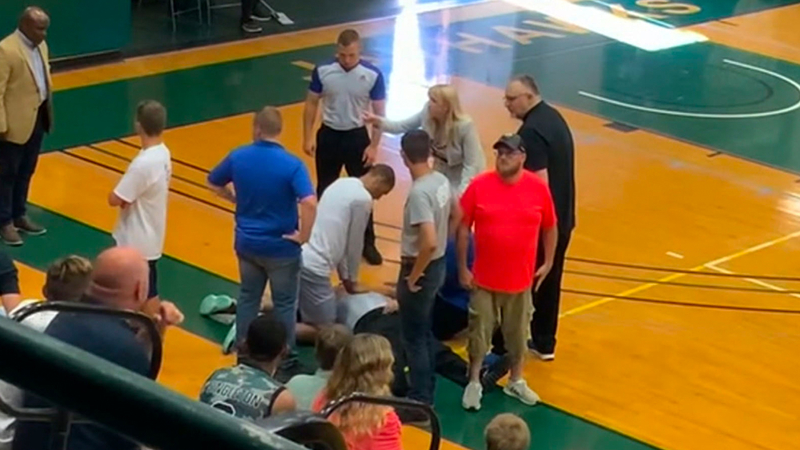 JAMESTOWN, New York -- After wrapping up a 24-hour shift as a firefighter in Toledo, Ohio, this past weekend, Myles Copeland went to New York to suit up for his other job, a player for Toledo Glass City of The Basketball League, for a playoff game against the Jamestown Jackals.

But his two worlds collided near the end of the first quarter of Saturday's game when a referee, John Sculli, passed out on the court and became unresponsive.

It happened across from Toledo's bench, and instantly, Copeland sprang into action. He checked Sculli's vitals, but didn't feel a pulse or see him breathing, so Copeland began administering CPR until paramedics arrived.

"It was kind of instinctual. It surprised me how quick I was able to switch into that mode, especially being in a basketball game," Copeland said during a phone interview with ESPN on Wednesday. "But with being a firefighter, when you're off the job, you're really not off the job. You still got to keep an eye out for the community and what's going on around you."

Copeland's quick response helped save Sculli's life. He's scheduled to have heart surgery this week to fix a blockage that caused him to pass out and is expected to be back reffing next season.

After Copeland's heroics, Toledo rallied to win Saturday's elimination game, and with another win Sunday, it advanced to the conference semifinals, where it will face the Kokomo Bobcats on Thursday in Indiana. The Basketball League plans to honor Copeland ahead of that game.

"A guy like this deserves to be celebrated," league president David Magley said during a phone interview. "Not just because he saved his life but the humility with which he carried himself afterwards.

"He's the kind of person that's our hero because he stepped up when he needed to and he won't take any of the credit himself. It was just divine timing."

Copeland, 25, played Division III college basketball at Trine University in Indiana, and this is his first season playing with The Basketball League. He's been a Toledo firefighter for a little more than a year.

His shifts at the fire department are 24 hours long followed by 48 hours off, so during the season he only made it to practices or games that fell on his days off. Having a shift end Saturday morning in time to make it to this playoff game ended up being fortuitous timing.

"Ever since then, people just, like, look at me. They just have a different feeling about me, like you're a hero," Copeland said. "It's been said to me so much, but still it's hard to have that click in my mind because I feel like I was just doing another deed, another thing that I was supposed to do. I didn't feel like I went out of my way to do anything special. It's just what I was put here to do. God was able to work through me. I feel like other people see me differently as a hero, but I don't see myself any different."
Report a correction or typo
Related topics:
sportscprbasketballfeel good
Copyright © 2022 ESPN Internet Ventures. All rights reserved.
TOP STORIES
Wake County homes left damaged by severe weather Wednesday
UK Prime Minister Boris Johnson expected to resign
Surging child care costs force difficult decisions
Hundreds more Fort Bragg soldiers return from deployment
Gas prices could fall under $4 soon, analyst says
Gov. Cooper signs Executive Order to strengthen abortion access
First case of monkeypox confirmed in Wake County
Show More
Man charged in shooting death of child, adult at Raleigh apartment
St. Augustine's luring west coast students with the HBCU experience
Triangle area on the lookout for spotted lanternfly
Companies hiring more teen workers to fill gap, according to data
Uvalde officer asked to shoot gunman before he entered school: Report
More TOP STORIES News