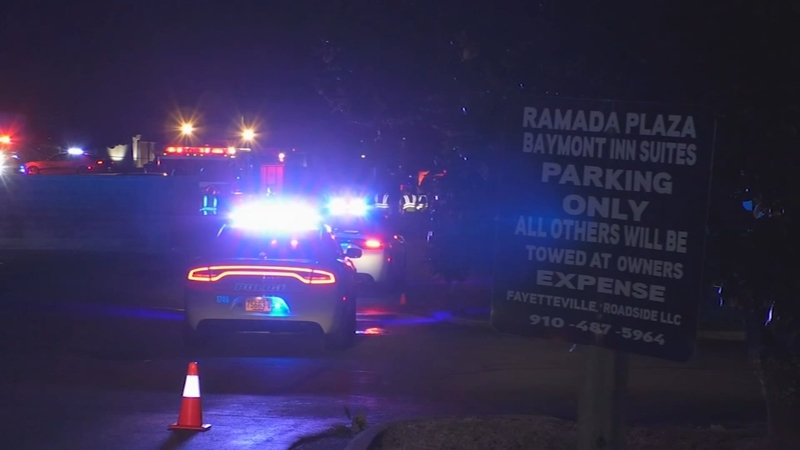 The brawl left six people shot, three of them dead, including Keith Dickey.

"I just keep on expecting him to call or come home and tell me about some awesome story that happened," said Blake Stoker, Dickey's cousin.

The two Army veterans lived together in Robeson County.

Stoker said he saw the 37-year-old Dickey on Saturday morning as he was leaving to ride his motorcycle.

Stoker said he received a call in the middle of the night that his roommate had been shot and killed.

"I let out a long no ... started crying. I'm just heartbroken for his son," said Stoker.

ABC11 asked Stoker whether Dickey was part of a motorcycle group. "I'd rather not comment on that," Stoker replied.

ABC11 asked Stoker that question because, on Sunday night, a store clerk working next to the Baymont Ramada told ABC11 that he called police after seeing a group of bikers fighting outside his business -- just hours before the deadly shooting.

"They were tearing each other up," said Robert Hamilton. "After I called 911, they dispersed. The police are trying to tie it all in together."

Police have not said whether the two incidents are connected.

on Monday, an ABC11 camera captured Fayetteville Police at the same exact store. According to the clerk, they were there because of a fight unrelated to Saturday's attack.

As for Dickey, Stoker said, "Keith was one of the nicest people you'd ever meet. He'd give you the shirt off his back kind of guy. Why would anybody want to kill him?"

William Davis was also one of the three who died in the shootings outside Baymont Ramada on Saturday.

Fayetteville police found the 42-year-old dead. He lived just five minutes away from the scene.

Loved ones told ABC11 off-camera that Davis was a family man, leaving behind four children, and some grandchildren.