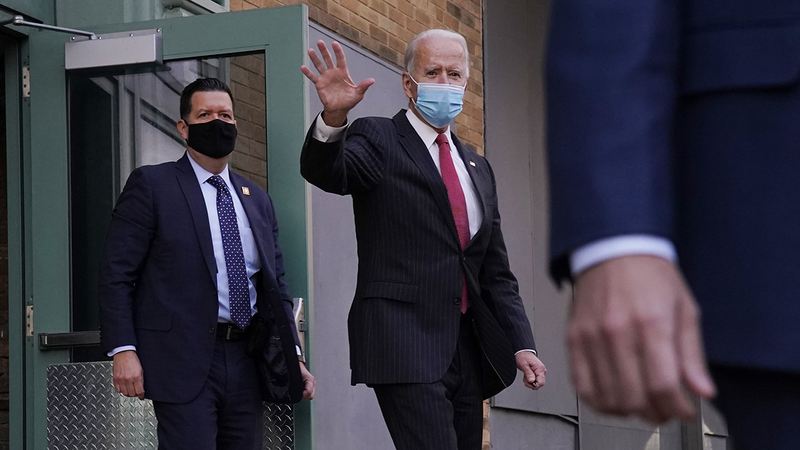 President-elect Joe Biden's team is making a fundraising push for its transition operations as the General Services Administration has yet to ascertain Biden as the election winner -- a move that would open up millions of dollars in federal money for the President-elect's transition work.

The Biden transition team sent a grassroots fundraising plea to its supporter list on Friday, with the email stating, "Without ascertainment, we need to fund the transition ourselves, and that's why we're reaching out to you today."

Congressionally appropriated transition funding is one of several key resources the Biden transition team is unable to tap into without ascertainment. The money allows for the incoming administration to fund its transition efforts, including paying for its staff and agency review teams.

Biden and his advisers have mounted a public pressure campaign for GSA Administrator Emily Murphy to formally recognize the election results and allow full transition planning to get underway, including access to classified intelligence briefings and coordination on distribution of an upcoming vaccine.

RELATED: Joe Biden could announce Cabinet picks as soon as next week

The transition team started its private fundraising efforts in June and has raised more than $10 million for the process so far, a source familiar with the fundraising efforts said. But the email sent Friday represents a new phase in the team's fundraising process as it is now turning to grassroots donors in their push.

"Grassroots supporters like you made a Joe Biden presidency possible," the fundraising email read. "And now we are counting on you once again to power us through this critical moment."

Three Democratic bundlers also said they have recently received requests to raise more money for the transition operation as the GSA's ascertainment is stalled. The maximum contribution to the transition is $5,000, significantly smaller than the $360,600 donation limits for the Biden Victory Fund in the general election.

"We need everyone to once again step up to help the Transition Team raise the resources it needs," one fundraising email from Chris Korge, the national finance chair of the Democratic National Committee, reads.

The President-elect has said his team has not ruled out legal options but argued waging a legal fight may not considerably speed up the formal transition process.

"The Biden-Harris transition has been planning for months for all possible scenarios. While we wait for the GSA Administrator to uphold the will of the people and be a proper steward of taxpayer resources, we will execute on contingency plans, including continuing to solicit private funds to support transition planning," a transition official said. "The nation faces too many challenges to not have a fully funded and smooth transition to prepare the President-elect and Vice President-elect to govern on Day One."

Biden and his advisers have publicly pushed for the GSA to ascertain the election, saying it complicates their planning efforts as the President-elect looks to take office on January 20th.

"This isn't a game of who gets to talk to whom. Our inability to start the informal agency review process has the potential to have real impacts across the country," said Yohannes Abraham, a Biden transition adviser. "There's no replacing the real-time information that can only come from the post-ascertainment environment that we should be in right now."

After the 2000 election, the GSA held up transition funding and office space for George W. Bush until then-Vice President Al Gore conceded in December. At a news conference in November of that year, Dick Cheney, who led Bush's transition before becoming vice president, said they would raise private money to fund their operations.