Bird flu cases increase across NC; experts say consumer prices may be next 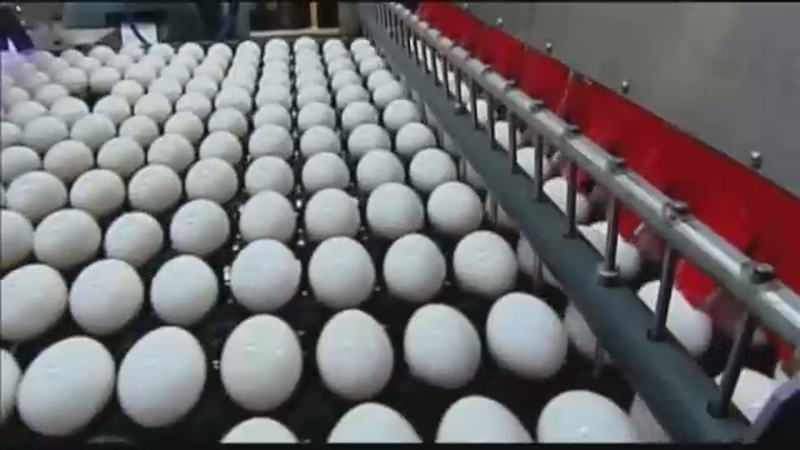 RALEIGH, N.C. (WTVD) -- More than 77,000 commercial birds across North Carolina have been affected by the High Path Avian Influenza (HPAI) or bird flu.

"There's a lot of people that are hurting right now because of the loss of these flocks. And so it's hard to mitigate against that, you know, there's definitely some things that we just can't control," Martin said.

Test results are pending at three other Wayne County locations that could affect nearly 300,000 birds.

There are state and federal resources available to farmers to help mitigate the financial impacts.

"This is a significant disease to commercial, particularly commercial but also backyard poultry. Those animals would be depopulated so that the virus is not spread into the food system so that it's not spread amongst other birds," explained Sarah Van de Berg, a biologist with the N.C. Wildlife Resources Commission.

The virus does not carry a health risk to humans.

"Throughout all the avian influenza breaks that we've seen across history in this country and others, there's been no evidence that this virus is transmitted through consumption of food products. So your food is safe. You're safe," Martin said.

He also said the flu cannot be spread from a live bird to a human.

Since February, more than 22 million birds across the United States have been affected by the virus in an estimated 24 states.

The outbreak is the worst in seven years. More than 50 million birds nationwide were affected in 2015 and the price of eggs nearly doubled.

"This is something that we haven't seen for a while, but in that outbreak in 2015, the poultry industry was able to learn so much from it and we have a lot of information that we gathered new protocols in place that have really helped us this time around and the response has been very well coordinated," explained Beth Breeding, the vice president for communications with the National Turkey Federation.

Already, the price of eggs has risen by 52% across the U.S. and local experts told ABC11 that this is still only likely to increase because of inflation and supply chain issues.

"It's a little bit too early to tell right now about the full impact. We are absolutely tracking that. At this point. We're about at 1% of annual turkey production that's been affected and for a frame of reference that was about over 3% back in 2015," Breeding explained.

Multiple wild birds have also been found with the bird flu. With 143 cases detected among wild birds, North Carolina is now reporting the highest number of cases in the U.S, according to the U.S. Department of Agriculture. The state is reporting almost three times more cases among wild birds than any other state.

Van de Berg explained a lot of the reason for the higher numbers in North Carolina is because many wild birds are tested after they are harvested from duck hunting and duck hunting is popular throughout the state.

On Tuesday, the state announced all poultry shows and public sales are suspended. Martin is highly encouraging every bird owner to keep birds indoors and to report any sick birds.

"This virus isn't going to go away anytime soon, and it's throughout the state. So everybody needs to be taking precautions right now," Martin said, "We have to assume that we're in harm's way when it comes to this virus and take all precautions with our birds to try to keep them safe."

Van de Berg said one of the biggest issues is all the unknowns. The bird flu in 2015 lasted for around six months but experts don't know how long this one will stick around.

"Is this here to stay or is this going to disappear as the birds migrated out and as the summer progresses? That's something we don't know. It's a lot easier to deal with this as a one-time event than it is to start making decisions about what do we do year in and year out," she explained.

Van de Berg said if people see multiple dead wild birds or birds acting particularly strange, they are encouraged them to report them to the state.