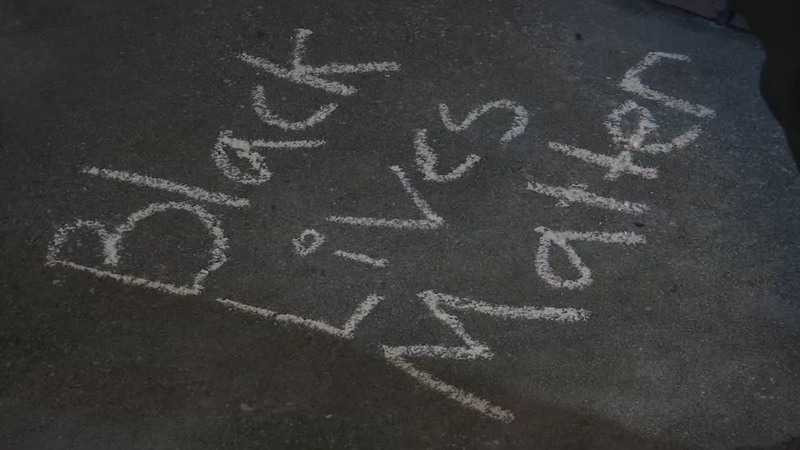 The city began removing the mural Monday. The art piece was always meant to be temporary and has been around the Market House for more than six months.

Myah Warren gathered a few Fayetteville residents to participate in this demonstration outside City Hall to avoid drawing a crowd or causing a scene.
Demonstrators, including Warren, wrote chalk messages around City Hall.

Warren told ABC11 she wanted to fill the front of City Hall with chalk-filled phrases like "Black Lives Matter, ""George Floyd," and "Breonna Taylor" to remind city leaders why the mural around the Market House was put up in the first place.

Many on social media and in the community criticize the city for taking down the art just a week after the U.S. Capitol riot and weeks before Martin Luther King Jr. Day and Black History Month.

"It wasn't fair, it wasn't right. So I'm letting the city council that Black lives do matter," said Warren.

#NOW: A few Fayetteville residents are filling up the front of city hall with “Black Lives Matter”, “George Floyd”, “BLM” in chalk. This is in response to the @CityOfFayNC removing the temporary street art around the Market House. @ABC11_WTVD pic.twitter.com/c3zs1fnYsv

The small group hopes the chalk messages sends a message that speaks volumes.

Councilwoman Waddell said she learned of the removal from the Monday press release. She goes on to say, "the entire council received an email from the City Manager regarding the possibility of removal and some alternate placements around the Market House a while ago but there was no council conversation about it."

However, Waddell also states that she would've supported the removal, if she had been given an ask, adding, "Our focus needs to shift from words on the ground to the people walking them and how we can truly begin the work of making some real differences."

Meanwhile, Councilwoman Ingram said she did not support the decision. In her Facebook post, the councilwoman said, "I have expressed numerous times since the beginning of the conversation of early December 2020 that if this was to be touched it need to be after Black History Month and even after something affirming needed to follow."

Mayor Colvin took to Facebook on Tuesday evening to reiterate his regrets. The statement reads, "Family, my deepest apologies for the city's insensitivity in removing the Black Lives Matter mural yesterday. Let me unequivocally state that Black lives do matter and all voices will be unified and prioritized in our community. Together, we can and will move Fayetteville forward."

In a Monday afternoon meeting with ABC11, Mayor Colvin said that city leaders have the intention of putting together some other kind of project related to the movement. It's a discussion he says will be brought to the forefront because of the recent outcry.