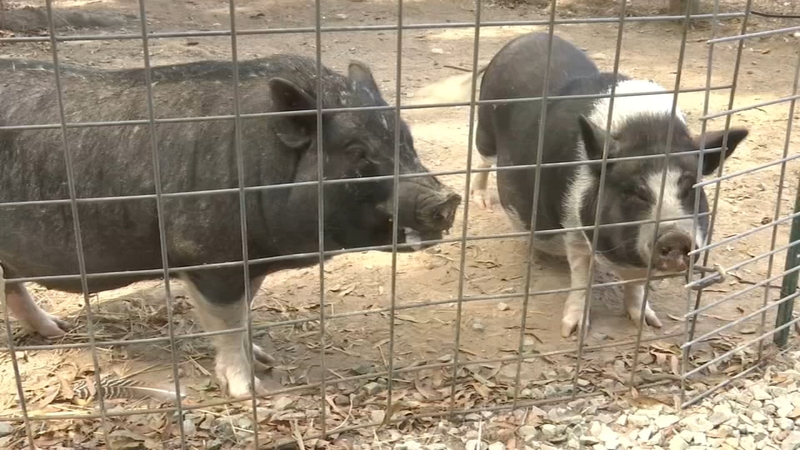 ROUGEMONT, N.C. (WTVD) -- A Triangle sanctuary says they have had to turn down requests for help due to a spike in the number of pot belly pig surrenders and strays.

Blind Spot Animal Sanctuary in Rougemont receives more than a dozen calls weekly from both shelters and citizens looking for assistance.

"There is this misconception of 'teacup pigs,' 'micro-pigs.' There's no such things, they don't exist. It's just a marketing term, a misleading marketing term. So we're seeing nearly every year more and more pleas for these animals," explained Alesja Daehnrich, a co-founder of the sanctuary.

Last week, they took in five pigs from shelters, including three from the Orange County Animal Shelter.

Orange County Animal Shelter Executive Director Bob Marotto said they have received eight pigs so far this year; from 2014-2016, the average was one or two annually.

"A lot of the people who get a pig, they are rarely educated on their care and what to expect," said Daehnrich.

While the shelter can provide short-term housing for a pig, it cannot give long-term care, making sanctuaries so important.

Advocates take particular issue with the term 'teacup,' when many of these pigs can quickly grow to more than 100-pounds.

"Everything small, everything cute sells ten times better than when (sellers) would say it's going to be a 150-pound pig," said Alex Daehnrich, Alesja's husband and fellow co-founder.

Blind Spot Animal Sanctuary is working with other organizations to find homes for pigs they cannot accept. They do adopt out their pigs in an effort to create more room to take others in, but urge people to do their research before adopting.