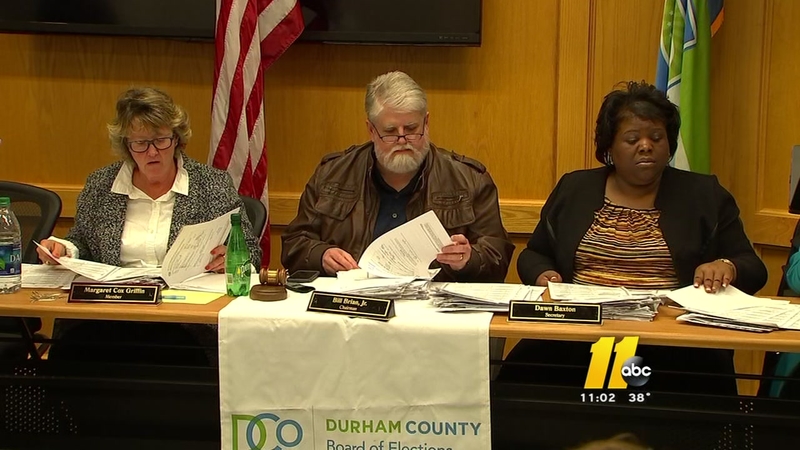 DURHAM (WTVD) -- Amid the mountain of absentee and provisional ballots came plenty of tired looks and deep sighs.

"I don't mean to offend you, but what you're asking for is a fishing expedition," Board Chairman Bill Brian told NCGOP attorney Thomas Stark, regarding one protest.

Durham County is one of the 35 local election boards still wading its way through stacks of election protests filed on behalf of Gov. McCrory's campaign.

The McCrory camp alleged there was an absentee "ballot mill" at work in Durham and that some people voted in multiple jurisdictions.

The board rejected the protests citing a lack of evidence.

Of the nearly 4.7 million votes cast, unofficial results give Roy Cooper a 6,500 vote lead over McCrory. That's up from the 5,000 vote lead Cooper held election night.

Cooper's campaign has pointed out the outgoing attorney general's lead. The campaign considers the extensive protests a sign of the governor's desperation.

"Gov. McCrory is doing everything he can to undermine the results of this election and the will of the people. But we won't let him," Cooper says in a video released Sunday.

"Roy Cooper thinks he's the Governor-elect of what? The voting dead?" countered Dallas Woodhouse, NCGOP Executive Director on Monday. "Roy Cooper should respect the process to ensure all legally cast ballots are counted before measuring the drapes. Even the State Board of Elections has an ongoing count of people who have reported voter fraud in the name of their deceased loved ones. ... Despite partisan lines, we want to make sure the man with the most votes wins this election, and it's a shame that Roy Cooper doesn't want the same."

By Monday night, 20 of the state's 100 counties had completed their official counts.

But they're still counting in Durham.

When ABC11 asked Chairman Brian about the potential to complete the county canvass by Tuesday. He responded: "In theory."

Brian say he feels the pressure but not the politics of the high stakes race hanging in the balance.

"Not at all. I'm not paying attention to any of it. I'm not reading the paper and I'm not watching TV. Just trying to do my job," Brian said.

The board did vote to move forward with a hearing Tuesday afternoon on a McCrory-backed protest questioning the accuracy of some provisional ballots.

The panel also deferred a decision on another protest regarding ballots allegedly cast by convicted felons -- while they wait for a ruling from the state.

The State Board of Elections is set to meet at 10 a.m. Tuesday morning.