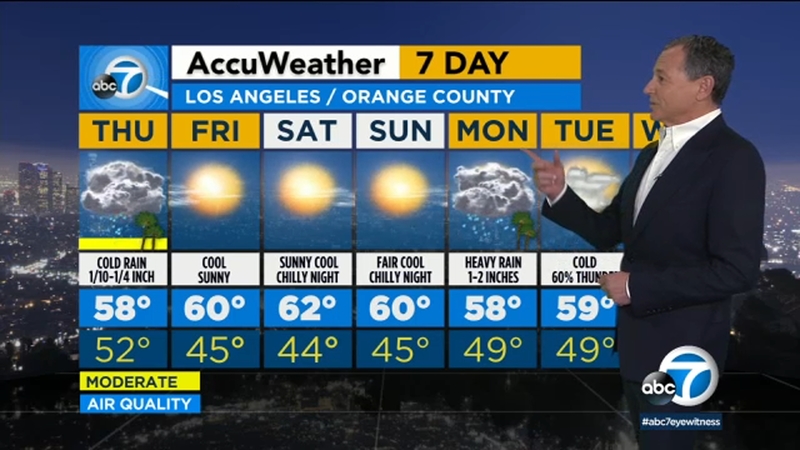 LOS ANGELES -- After a career spanning more than 47 years with ABC and The Walt Disney Co. -- including 15 years as Disney CEO -- Bob Iger is set to step down as executive chairman of the board at the end of December.

"I'm often asked: Would I change anything? The answer's no, it worked out just fine," said Iger, who joined KABC for an in-studio interview on Thursday. "I've had just a great experience over 47 years with ABC and Disney. I've loved what I've done, every day that I've come to work I've been happy. I'm privileged to have had the opportunity to run this great company."

Iger said he was "looking forward to what comes next, although I'm not 100% sure what that is. But I haven't had a day off since 8th grade."

Iger's 2019 memoir, "The Ride of a Lifetime: Lessons Learned from 15 Years as CEO of The Walt Disney Company," became a New York Times bestseller. Asked if he plans on writing another book, he said: "I am. I'm thinking about it."

"Right now, it feels like a gigantic homework assignment," he added. "But yes, I've been fascinated by how leaders led through the global pandemic, leading through a crisis."

In light of recent forays into space by fellow CEOs Jeff Bezos and Richard Branson, Iger was asked if he has any similar aspirations.

Some existing places will be demolished to make way for the project, including the Earl of Sandwich shop, Sugarboo store, a Starbucks and the former AMC Theaters.

"No, I don't. I talked to Michael Strahan last week," Iger said, referring to the "Good Morning America" co-host who is preparing for liftoff aboard the Blue Origin New Shepard. "That's just not something that has excited me or interested me."

Iger, a former weatherman, joined ABC in 1974, 22 years before Disney acquired the network.

Asked by KABC meteorologist Leslie Lopez if he would co-anchor a weather report on Thursday morning, Iger noted: "I have not done the weather in 48 years."

Nevertheless, he gamely delivered the latest forecast to the station's Southern California audience.

"By the way, I started as a weatherman when I was 23 years old," he told Lopez. "So the possibility exists that you could become the CEO of The Walt Disney Company."

Iger stepped down as CEO of Disney in February 2020. The company named as his replacement Bob Chapek, who had most recently served as chairman of Disney's parks, experiences and products business.

Iger will remain executive chairman through the end this year. During his tenure, he steered Disney through the successful purchases of Lucasfilm, Marvel, Pixar and other brands that became tremendously successful for Disney. In 2019, the top five movies in U.S. and Canada theaters were all Disney movies, including two from Marvel and one from Pixar. With the release of the latest "Star Wars" movie, Disney had seven movies that each sold at least $1 billion in tickets worldwide that year.