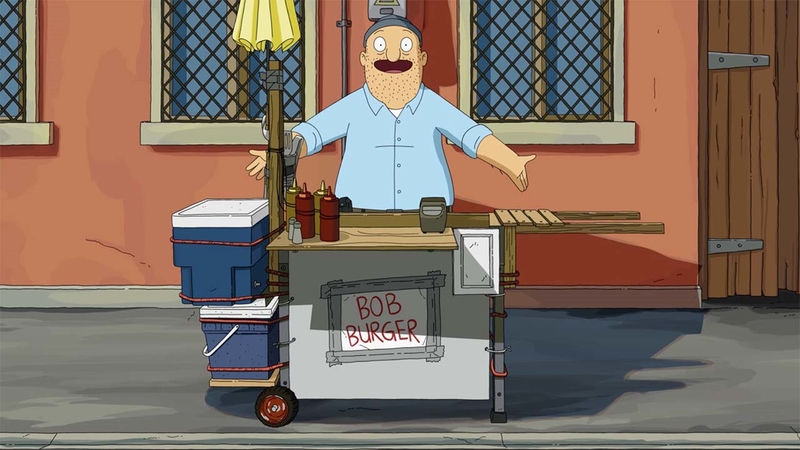 "If you can't get the people to your burgers, you bring the burgers to them."

That's Teddy's advice for Bob and Linda Belcher in an exclusive new clip from "The Bob's Burgers Movie." The Belchers, faced with a looming loan payment deadline, have to get creative to pay the bills after a sinkhole threatens to block the front entrance to Bob's Burgers indefinitely.

In the clip, Teddy unveils the Mobile Bob Burger Mobile -- his souped-up home grill with upgraded wheels, an umbrella and a cooler -- along with a plan to sell food on the street while their restaurant remains inaccessible.

"I figure you grill, Linda serves and I'll push it around for you," Teddy says as Bob seems unconvinced, citing their lack of a license to sell food on the street. Bob eventually relents, encouraging Teddy to "light this sucker up."

Watch the exclusive clip in the video player above.

Meanwhile, the Belcher children Tina, Louise and Gene set out to solve a mystery that could save the family business. The film's official synopsis teases: "As the dangers mount, these underdogs help each other find hope and fight to get back behind the counter, where they belong."

The film, based on the long-running animated television series, features the voices of H. Jon Benjamin, Dan Mintz, Eugene Mirman, Larry Murphy, John Roberts, Kristen Schaal, with Zach Galifianakis and Kevin Kline. It was directed by Loren Bouchard and Bernard Derriman with a screenplay by Bouchard and Nora Smith.

"The Bob's Burgers Movie" his theaters this Friday, May 27. Click here to buy tickets.