Stay in a haunted hotel room at the Santa Cruz Mountains' Brookdale Lodge, one of the most haunted locations in the world 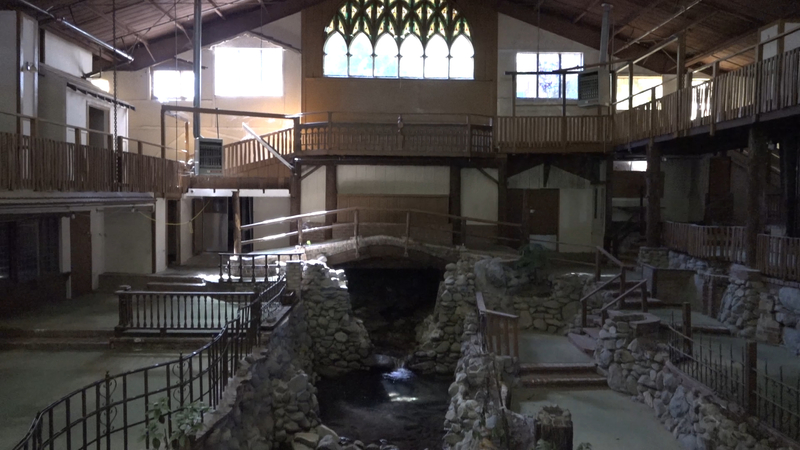 BROOKDALE, Calif. -- The Bay Area has some of the most historically haunted places in the world. But none may be spookier than the Brookdale Lodge nestled in the Santa Cruz Mountains in Brookdale, Calif.

"There are a lot of places all over the world that are supposedly haunted, right?" Brookdale Lodge Proprietor Pravin Patel said. "But this place here, I think it's real. We get quite a few guests that know the history of it. There is a couple of rooms that are famous for being haunted. People want to experience something. They want to experience that past and some just want to see if it's real or not. I don't think that we've had a guest that has stayed in one of those haunted rooms that were disappointed."

Hello from the world famous @brookdalelodge, home to dozens of spirits who have haunted this place for hundreds of years. pic.twitter.com/Mccny4AlGj

The lodge dates back to the 1800's and is unique for so many different reasons.

"There's very few people that don't have an idea of what the Brookdale Lodge is," Patel said. "There's very few because of the celebrity status. Marilyn Monroe and James Dean both stayed here in the past. President Hoover used to fish off of our bridge, I believe, in the 1920's."

Patel acquired the Brookdale Lodge in 2015 after unsuccessfully trying to purchase the location a few years prior.

He calls it, "coming through the back door".

The lodge was closed for many years as the building began to deteriorate.

Patel has successfully re-opened phase one of the project as the hotel rooms can be rented out.

LIST: The most haunted places in the Bay Area

Phase two includes some of the more famous locations that he says are what make the lodge what it is.

"My number one goal is to cherish what's here from the past," Patel said. "What makes the Brook Room what it is, is the past. Every time that I speak with someone and mention the Brookdale Lodge, they say, 'that's the lodge in the mountains in Santa Cruz County and it's haunted'."

So given the history of the hauntings, what made Patel want to buy it?

"I think I was ready for a unique challenge," Patel said. "When I say unique, this lodge is very unique. There's numerous spirits here I believe. One of the most famous spirits is Sarah Logan."

The story goes that young Sarah Logan, neice of current owner Judge Harvey Logan, was playing in the Brook Room when tragedy struck.

The room is the only building in the world that has an active, running river right down the middle of it.

Sarah tripped, falling into the brook and drowned.

That was in the early 1900's, she is now one of dozens of spirits that still haunt the Brookdale Lodge today.

"When Psychic Sylvia Browne came through here, she recognized more than sixty spirits that were here and essentially trapped in this area," Brookdale Lodge Guest Services Host Josh Volden said. "There have been multiple people that have seen her Sarah's apparition. One of the best ones that I heard was from a lady that did catering here in the 1990's. She had brought her young son in the Brook Room and he was running around and thought that he made a new friend. After hugging his new friend, he let go of the hug and the little girl was gone. To this day, he will not come back here because it was such a profound experience for him."

From children playing with Sarah, to construction workers leaving the lodge running for the exits, almost everyone that has visited the lodge has their ghost stories.

Travel Channel's Ghost Adventures and Ghost Bait have both investigated the lodge to see the stories play out live themselves.

These stories even come from those who stay in the haunted rooms.

The staff don't always tell guests that they are staying in the haunted rooms, but they still hear the stories of guests complaining of weird noises from above and having their clothing moved around the room.

They are simple, but scary stories.

However, the stories in the pool area have more profound effects.

"I hear noises," General Manager Ash Vaishnav said. "I hear knocking on the windows. I hear people talking and walking with heavy footsteps. It's quite a lot. The pool room has generated more negative energies. We have so many guests that come on a tour of that particular area and they would feel uncomfortable and feel a heavy energy there."

The pool room is said to have some of the most negative energies on the property. A different girl drowned in the pool. The General Manager of the @brookdalelodge says he has heard voices often coming from the pool deck. pic.twitter.com/9DGxTXb3fQ

The negative energies stem from another drowning of a girl, this time in the pool.

"The mermaid room has had that name since the beginning," Volden said. "They actually had mermaid shows there. But, there was a girl that passed away in the pool. So it's believed that the top deck of the pool is very haunted. I have been in several haunted places and it's always the same feeling. You get it in the Brook Room and you definitely get it at the top of the pool deck. I'm not sure what, but something is definitely happening there too."

LIST: The best pumpkin patches and corn mazes in the Bay Area

Patel expects that the Brookdale Lodge will be completely back open to the public in a few years.

He wants to re-create an iconic location that's remains incredibly important to the people of Brookdale.

Of course, there is still the issue of the hauntings and spirits who remain at the Brookdale Lodge.

But Patel says while he plans to upgrade the lodge, the spirits can stay.

The new owner, Pravin Patel, has been hard at work to renovate the rooms and overall property at the @brookdalelodge. He hopes it will be complete in 2020. However, Patel says he wants to keep everything as close to original as he can to keep the spirits comfortable in their home pic.twitter.com/Y7FFXWFCuW

"I don't believe that there's anything really threatening or harmful here," Patel said. "I've had people suggest that we do some sort of exorcism to try and get rid of the spirits so people aren't afraid to come. The spirits have been here for 100 years. Outside of a few people getting spooked and hurting themselves by running or jumping, I don't think the spirits have done any harm here. I don't see any reason why we can't coexist. The way I look at it, it's a different dimension and they might be stuck in the dimension that they don't want to be stuck. They may not be comfortable with where they're at, but they're stuck. They have no choice and I think we have to make the best of it and coexist."