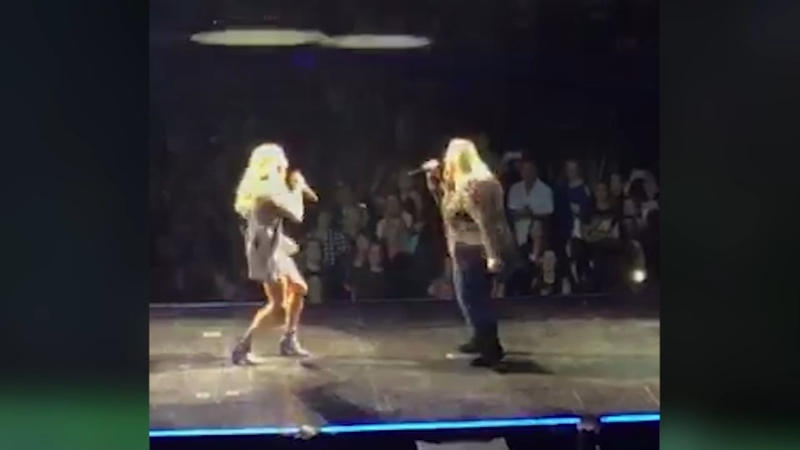 SAMPSON COUNTY, N.C. (WTVD) -- Caitlyn Spell is still on cloud nine after being selected to rap on stage with Carrie Underwood at her Monday night concert in Raleigh.

"Me and her are only six months apart. We've always been like sisters," said Spell. "She's just 15 and has gotten a heart transplant. She's handled it like a champ and in my world, she is a champion."

Madison was born with heart disease. She's been in and out of surgeries at Duke Hospital on too many holidays to count. Last April, she had a heart transplant.

"I feel like I can overcome anything," said Madison Danks.

Spell entered a video in Underwood's contest rapping the lyrics to her hit song, "Champion" honoring the champion in her life, Madison.

She won the contest and was pulled on stage.

"I was freaking out before I got on stage. I forgot the lyrics. They had to look them up for me," said Spell.

"I was so pumped up. I was so excited. I got even more excited when my cousin came out," said Danks.

Spell snagged a picture with the seven-time Grammy award winner and an autographed hat. It's a memory that will last a lifetime and a reminder to Madison that in order to be a champion you must act like one.

"I did want to give up. I never showed it. I had to be strong for everybody else," said Danks.
Report a correction or typo
Related topics:
community & eventssampson countyraleighconcertcelebritycarrie underwoodsampson county news
Copyright © 2022 WTVD-TV. All Rights Reserved.
TOP STORIES
Winter storm moves out, refreeze possible overnight
NCSHP reports 200 crashes statewide, urges drivers to stay home
Monday events canceled, postponed due to winter weather
Why do we get freezing rain instead of snow or sleet?
FBI identifies hostage-taker at Texas synagogue
How to drive on snow, ice and get out of a skid
Expect more worrisome COVID variants after omicron, scientists say
Show More
After Biden's first year, the virus and disunity rage on
Novak Djokovic leaves Australia after court rejects visa challenge
Ukraine claims Russia behind cyberattack in 'hybrid war'
Hostages in N. Texas synagogue 'out alive and safe,' Gov. Abbott says
Man shot, killed by officer at Duke University Hospital
More TOP STORIES News