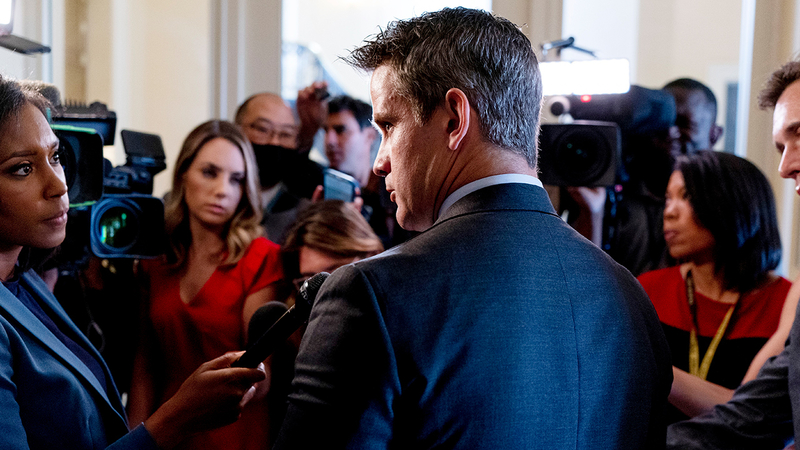 WASHINGTON -- Republicans looking to undermine an investigation into January 6 are returning to a familiar playbook for the GOP: invoking Speaker Nancy Pelosi.

After Rep. Adam Kinzinger of Illinois joined Rep. Liz Cheney of Wyoming in becoming the lone Republicans to serve on the select committee, the GOP started to ramp up its attacks on the duo, accusing them of harboring an anti-Trump agenda and suggesting they're just doing the speaker's bidding. House Minority Leader Kevin McCarthy even debuted a new label on Monday, tagging Kinzinger and Cheney as "Pelosi Republicans."

The California Republican also forced a floor vote Monday evening on a resolution demanding that Pelosi accept his original picks for the panel who the speaker had vetoed. While the effort inevitably failed, it did once again put Cheney and Kinzinger in the same camp as the Democratic Party, as they were the only Republicans to vote in favor of the motion.

By linking Kinzinger and Cheney to Pelosi -- who is seen as toxic in the most conservative corners of the GOP -- Republicans are hoping to puncture the pair's Republican credentials as a way to chip away at the overall credibility of the bipartisan probe. Meanwhile, a growing number of House Republicans are clamoring for Kinzinger and Cheney to face internal consequences for accepting committee seats from the California Democrat, sources tell CNN, though GOP leaders have little appetite to go that route.

"They have stupidly sided with Democrats in a way that begs the question of their desire to be a part of our conference," said Rep. Chip Roy, a Texas Republican. "But I'm gonna let the leader decide what he thinks is the right path forward."

Of course, Kinzinger and Cheney are accustomed to living on an island these days. They were two of just 10 House Republicans who voted to impeach then-President Donald Trump and the sole GOP lawmakers to vote in support of the select committee. Their Republican colleagues, upset that they broke ranks and accepted Pelosi's nominations, are now attempting to brandish them as an extension of the Democratic Party.

Armstrong was one of the three McCarthy picks that Pelosi deemed acceptable to serve. The speaker and other Democrats have even suggested that Armstrong, Rep. Rodney Davis of Illinois and Rep. Troy Nehls of Texas are welcome to join the committee if they'd like. But all three have stuck by McCarthy and turned down the opportunity.

"If they think this is going to get any credibility with 50% of the country, I would actually argue that those two (Cheney and Kinzinger) are probably -- there's a special level of disdain across the country," Armstrong said.

The pair of Republican rebels is about to find themselves even more isolated as they embark on a consequential investigation into the Capitol assault that the rest of their party has dubbed unnecessary and, in some cases, tried to stop from happening altogether. Cheney and Kinzinger's high-profile presence on the panel, which Democrats are counting on to bring bipartisan legitimacy to the probe, has undoubtedly put them directly in the line of intraparty fire.

And it's Democrats who are racing to their defense, a sign of how the politically perilous assignment has endeared Kinzinger and Cheney to the left but made them even bigger pariahs on the right.

Speaking to reporters at a White House Rose Garden event on Monday, House Majority Leader Steny Hoyer disputed the idea that Cheney, a rock-ribbed conservative who hails from a Republican political dynasty, and Kinzinger, a former Air Force pilot from the Midwest, were liberal, Pelosi acolytes.

"The difference is, and this is the key, they both believe in the truth," Hoyer said. "That ought not to be a partisan issue. Truth ought to be an intellectually honest pursuit, and that's what Liz Cheney and Adam Kinzinger are going to do."

And an aide to Pelosi tweeted out a ProPublica page that shows McCarthy has voted with Pelosi 37% of the time, which is more than Cheney has.

"Not only does Congresswoman Cheney have a more conservative voting record than Minority Leader McCarthy, as recently as last year, McCarthy praised her for doing an 'amazing job' as leader of the House Republican Conference," Robyn Patterson, a Pelosi spokeswoman, said in a statement.

For Cheney and Kinzinger's part, they're brushing off what they have called the "childish" name-calling from the GOP leader and are making clear that this isn't about Pelosi, party or politics, but rather an oath to the Constitution.

"We've got serious business here," Cheney said, right before heading into a select committee meeting. "We have important work to do."

In sign of just how crucial Democrats view their GOP colleagues' roles in the investigation, Cheney will give an opening statement directly after Chairman Bennie Thompson, a Mississippi Democrat, during the select committee's first hearing with police officers on Tuesday, according to a source familiar with the matter.

And in an unusual move Monday afternoon, the Republican members of the select committee joined the Democrats for a prep session, walking through lines of questioning and previewing some of the never-before-aired video of the Capitol assault that will play during the panel's hearing. Sources on the committee said that at this point the group is acting like one cohesive unit, as opposed to two distinct sides. It is a trend they hope will stick and lead to positive outcomes.

House Republicans are still sussing out exactly how they will launch a sustained response to the Democratic-led probe into the Capitol assault, though they want to zero on security failures. In the meantime, however, they are sharpening their attacks on Pelosi, Kinzinger and Cheney.

"It's clear that Pelosi only wants members on this committee who will stick to her talking points and stick to her narrative," Rep. Jim Banks of Indiana, one of the Republicans Pelosi blocked from serving on the panel, said on "Fox News Sunday." "That's why she's picked the group that she's already picked. And anyone that she asks to be on this committee, from this point moving forward, will be stuck to her narrative, to her point of view."

A growing number of GOP members, particularly in the hard-line House Freedom Caucus, are calling for McCarthy to kick Kinzinger and Cheney off their other committee assignments, even though Pelosi could ultimately prevent that from happening.

Some Republicans are predicting that the GOP conference will at least have a special meeting to debate the idea.

"They're clearly doing (Pelosi's) bidding on the committee," said Rep. Mike Rogers, an Alabama Republican. "It will be dealt with by the full conference, I'm pretty certain of that. The full conference is going to take this up. We have a political conference tomorrow, and my guess is the motion will be made there, and then we'll have to have a special conference on this issue, to discuss the matter."

Kinzinger, however, said he wasn't worried about the threat of punishment.

"We're doing big things right now," he told reporters. "If the conference decides or if Kevin decides they want to punish Liz Cheney and I for getting to the bottom and telling the truth, I think that probably says more about them than it does for us."

Kinzinger -- whom Pelosi called personally Sunday morning to ask him formally to join the panel, a source familiar tells CNN -- also has said he's not afraid to subpoena fellow GOP members if that's where the select committee's investigation leads.

"I want to know where the facts lead, and if that includes members that had a role in organizing or that they knew or that tried to cover up, that's important," he said.