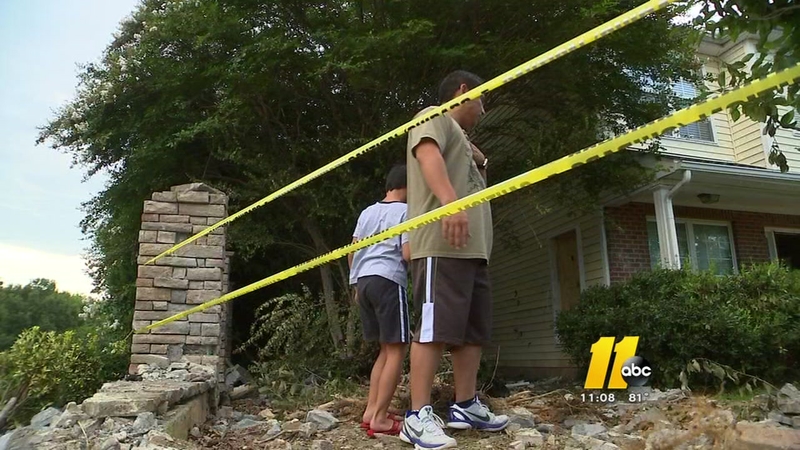 RALEIGH (WTVD) -- Carlo Bernarte is on the verge of abandoning his home to save his family. Early Saturday morning, his property in Raleigh was hit by a driver for the 6th time.

"I'm numb," said Bernarte as he walked through the damage. "The people who have the power to help me in my situation, I don't think, I'm not a priority to them."

If this story sounds familiar, you may remember Bernarte's story from October 2015. That's when ABC11 reported that a drunk driver hit his home and later died at the hospital.

Bernarte actually kept the cross of flowers that marks the loss. But early Saturday morning, a sixth driver plowed through the cross, the entrance wall to the neighborhood, and right through Bernarte's property, sending trees to the ground and rocks through the wall and windows.

"All the particles from the wall, came crashing through my window," said Bernarte.

Raleigh police confirm the crash happened at 4:51 a.m. but as of Sunday night, they have not confirmed the details of what led up to the crash.

Bernarte moved into the home that sits on the corner of Fawn Glen Circle and New Hope Road in 2004. He said his home had been hit at least once before he moved in, but he never thought it would happen again. When he moved in with his wife, and one son, the house was hit in 2007 and in 2008. As their family grew to include three children, so did the number of hits, spanning from 2013 to now 2016.

Despite improvements...Man's house is hit by car now for the 6th time. Our last story: https://t.co/Tb6yIb7kV4 pic.twitter.com/mGxD4EU8ZR

He's even lost his homeowner's insurance over this.

"From like two accidents ago, already sent me a letter that they're like canceling it because of the frequency," said Bernarte.

He has been talking to city engineers and even asked that the guardrail already on New Hope Road be extended. But he's been told that extending the guardrail is a safety issue because it could block the line of sight for drivers leaving the neighborhood.

"They said the only way they could extend the guardrail is if they close access to the neighborhood," said Bernarte.

Since the October crash, the city installed solar lights on the chevron signs that sit on the curve, but Bernarte said he has been telling them they don't work. He also said that before Saturday morning's crash, another driver almost crashed into his house last week.

"I get nervous anytime I hear a commotion or the screeching of the tires," said Bernarte.

He plans on moving his family as soon as he can and in the past has talked about seeking legal help.

"Who is liable for this? Is it the city? NCDOT? The builder? The engineer who approved building a house here?" said Bernarte. "Probably no action would be taken until the next accident happens."